ELMSFORD, N.Y. (June 20, 2012) - It is with deep regret that we inform you that former MGA staff member Dan Dinan Sr. passed away at the age of 82 at his home on Saturday, June 16. Dan was a key ingredient in the MGA championship department for more than twenty years.

"As a member of the MGA’s Tournament Field Team, Dan’s marvelous people skills, his attention to detail, reliability and loyalty made him a valuable and trusted partner," recalled Gene Westmoreland, the MGA's former Tournament Director. "For 20-plus years he helped build our reputation. He was a great asset to the Association and an even better friend."

Dinan, a revered teacher, coach, husband and father died at his home, surrounded by his family. One of seven children, he was born on February 4, 1930, to Mary and Joseph Dinan in Easton, Pennsylvania. He served in the Navy during the Korean War before marrying his wife of 57 years, Rita, whom he called his "guiding angel." His life was devoted to his family and his community, and he has l 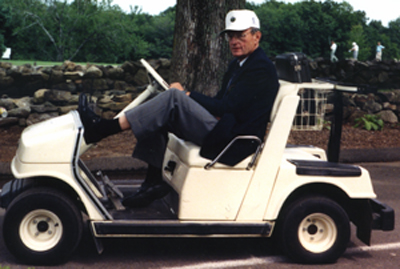 eft an enduring imprint on both. He and Rita moved to Orangeburg, N.Y., in 1959, and he began teaching Math at Tappan Zee High School. From 1973 to 1991, he served as Assistant Principal and Dean of the High School, and for six years starting in 1963 he coached the varsity boys basketball team. His love for the game was evident as he refereed basketball games between teams from grade school through college for the next 50 years. The community’s respect and appreciation for his service was recently recognized by IAABO, which established the “Dan Dinan Award” to be given annually to the varsity team in Rockland County exhibiting the best sportsmanship.

In 1979, he embarked on his career as varsity golf coach for Tappan Zee, a position he held for 31 years. He compiled a remarkable record of 396-98-10 and earned a place in the Tappan Zee Athletic Hall of Fame. He mentored scores of golfers, and as his High School teaching duties tapered off, he worked for the Metropolitan Golf Association and then at the Rockland Country Club where he was affectionately called by what so many people knew him as: Coach. The life lessons he tried to impart — play by the rules, work hard, have fun — he said he learned while playing marbles as a youth; lessons, he fondly recalled, he utilized to become the Eastern Seaboard Marbles Champion in 1940 at age 10.

Daniel is survived by his wife Rita, and his children: Diane and husband Richard Gelletich and their son, Christopher; Susan and husband Dean Thomson and their children Richard, Bridget and Daniel; David and wife Joanne Dinan and their sons James and Joseph; and Dan and wife Elke Dinan and their sons Sergio, Kyle, and Jason. He is also predeceased by his five brothers Ted, Dick, Fred, Larry, Gerry and his brother-in-law Brother Francis Lonergan, and survived by his sister Mary Elizabeth Giberson and husband Dudley, his sisters-in-law Mary Nimmo and Peg Connors, and many nieces and nephews. Visitation will be held on Wednesday, June 20th, at Moritz Funeral Home, 98 Route 303 South, Tappan, New York from 6 p.m. to 8 p.m. and on Thursday, June 21st, from 3 p.m. to 8 p.m. A Mass of Christian Burial will be celebrated at 10 a.m. on Friday, June 22, 2012 at St. Catherine’s Church 523 Western Highway, Blauvelt, NY 10963. In lieu of flowers, please send any memorial contributions to St. Catherine’s Church or the charity of your choice.