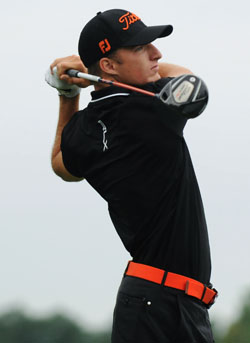 ELMSFORD, N.Y. (June 5, 2012) – After 2006 Carter Cup champion Morgan Hoffmann of Wyckoff, N.J., left his May 15th U.S. Open Local Qualifying Round on May 15 at Alpine Country Club in Demarest, N.J., he had reason to be a bit disappointed. The 22-year-old, who enjoyed a successful three years at Oklahoma State University and played on the 2009 Walker Cup team, turned professional in 2011 with his sights firmly set on playing in the biggest events and joining Rickie Fowler, his housemate in Florida, on the PGA Tour. Instead, his return to his home turf of New Jersey did not go as planned, as Hoffmann shot 75 and left Alpine in limbo as the first alternate, unsure of whether this year’s U.S. Open at the Olympic Club would be a possibility.

Hoffmann found out late last Friday that he had gotten a spot in the Sectional Qualifying Round in Columbus, Ohio, after a few players withdrew, and he made the most of it. He shot rounds of 69 at Ohio State University’s Scarlet Course and 72 at Scioto Country Club to get into a four-man playoff for the last three qualifying positions, and his birdie on the second playoff hole secured his spot in the field at Olympic. It will be his second U.S. Open appearance, after narrowly missing the cut at Pebble Beach in 2010.

“I learned [from 2010] that I just need to go out there and have fun,” Hoffmann said while awaiting a flight to Mexico, where he’ll be playing in the Nationwide Tour’s Mexico Open this week on a sponsor’s exemption. “I’ve been trying to play golf lately like I’m on my home course, and it just relieves so much pressure.”

While Hoffmann grew up playing at Arcola Country Club in Bergen County, New Jersey, the home course he’s referring to is the Dye Preserve in Jupiter, Fla., a tour pro hotbed where Hoffmann plays regular matches with former Oklahoma State teammate Fowler and other pros. Seeing his close friend succeed on Tour gives him confidence that he can, too.

“I’d say my matches with him are pretty much 50/50. I just need to have some confidence builders and I’m ready to go. I’ve been working with my coach really hard this year and I’m really looking forward to the Open.”

Hoffmann has experience at this year’s host site, which will certainly help. He played in the 2007 U.S. Amateur and, while he missed making match play, he shot a one-over-par 71 on Olympic’s Lakeside Course, which will host the U.S. Open. “I know the course fairly well,” he adds.

While Hoffmann has a relatively low-key personality, his experience at the Columbus Sectional Qualifying Round was not without its dramatic moments. After arriving in town on Sunday night there was a mix-up about whether he was actually in the field or would have to show up at 6:00 AM as an alternate. The confusion was straightened out quickly but as Hoffmann said, “It was scary. I can laugh about it now, though.”

“In the first round I hit 16 greens and missed a ton of putts, so my 2-under could have easily been 8-under,” he recalled. “Then in the second round [at Scioto], I started missing some fairways on made a crazy double bogey on No. 17. My ball hit a rake and rolled back into a water hazard.”

Instead of feeling defeated, Hoffmann went into the four-for-three playoff amped up, and flew the opening par-three hole with his tee shot, forcing him to make a 10-foot par putt on the hole that he called “huge.” He then birdied the next hole to become the first player to survive the playoff.

Now it’s on to the 112th U.S. Open, where Hoffmann will build on his 2010 experience in hopes of making the weekend. It’s something he’s been working toward his entire life and a challenge he looks to be ready for.