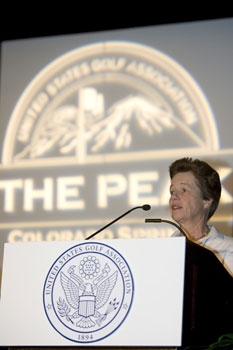 ELMSFORD, N.Y. (November 14, 2012) – The Metropolitan Golf Association is pleased to announce that Emily R. Crisp (Missy), from Mill Neck, N.Y., will receive the 2012 MGA Distinguished Service Award. Crisp, 71, is being recognized for her impressive record of volunteer service to the game that spans 25 years. Like few others, she has sought to use her knowledge in the fields of education, business, technology, and philanthropy and translate it into a career of service that has helped to elevate and grow the game of golf.

The MGA Distinguished Service Award was created in 1973, and is presented annually to a candidate who has contributed “distinguished service to golf and its related activities, consistent with the valued standards and honorable traditions of the game.” Some of its past winners include Joe Dey, David Fay, Robert Trent Jones Sr., Dave Anderson, Rees Jones, and P.J. Boatwright.

Missy was born and raised in New Jersey and earned a bachelor’s degree at Vassar College and an MBA from Hofstra University. Her career began in education, but after 20 years of teaching math to elementary and middle school students at the Green Vale School in Old Brookville on Long Island, she began a new career in technology when she founded Crisp Computer Corporation in 1983. The company provided consulting services to businesses and individuals to help them navigate through hardware and software installations and build customized applications. After developing several programs for municipal operations, including one for New York State that tracks property and tax management needs, Crisp Computer merged with another Long Island company, Admit Computer Services (dba Impact), that develops and markets public-safety software. She went on to serve as CFO of Admit from 1992 to 2010.

Golf entered Missy’s life early, at age 5. Growing up she played primarily at the Fishers Island Club(she is now also a member of Piping Rock and Seminole), and would go on to win the club championship there 14 times. But it was not until later that her passion for golf connected with her professional career. In 1999 she was asked to serve on the board of the United States Senior Women’s Golf Association (no relation to the USGA) where she helped that group customize their tournament scoring program. At the same time, she also was serving as the Website Administrator and Publications Chair for the Women’s Metropolitan Golf Association. She would eventually join the boards of the WMGA and the Women’s Long Island Golf Association, and was also the chair of the Ladies Golf Committee at the Fishers Island Club.

Missy’s work with these groups quickly caught the attention of other influential golf organizations and people, among them Bill Campbell, a fellow Seminole member and chairman of the USGA Nominating Committee, who recognized her unique qualifications and proposed her nomination to the 15-member USGA Executive Committee. He commented at the time, “occasionally, a rare talent comes along, and that’s just what Missy is.”

She served the USGA Executive Committee for seven years, including as Treasurer from 2004 to 2005 and Secretary from 2006 to 2008, becoming only the second woman to move into those ranks. While at the USGA she flourished, serving on the Membership, Audit, Communications and Championships committees, and chairing the U.S. Senior Amateur Committee. A nationally accredited Rules expert, her ability to make difficult and complex rulings on a national stage earned her great respect among peers and players.

Brigid Lamb, former Executive Committee member, served and played with Missy often. “Missy is a great Rules and Tournament official; fair, even-handed and knowledgeable, and unafraid to express herself on matters that were important to her,” Lamb says.

Perhaps Missy’s greatest contribution, however, came as a member of the USGA GHIN Committee that oversees the Golf Handicap and Information Network (GHIN), the USGA service providing Handicap Index calculations for regional and state golf associations. Missy was appointed chair of the committee in 2003 and with her technical background excelled in this role, helping GHIN through a period of great growth and expansion. She also proved to be a valuable member of the USGA Foundation Grants Committee, which directs funding to deserving golf programs across the nation. These include the MGA Foundation’s GOLFWORKS student intern program and The First Tee of Metropolitan New York, of which she has been a big supporter.

Even with all of her other work, Missy has continued to find time to remain actively linked to education. From 1989 to 1993, she taught adult computer classes at C.W. Post and has served on the Board of Trustees for Hamilton College from 1987-1991, Clarkson University from 1983-1988, and was President of the Board of Trustees at Miss Porter’s School, the boarding school she attended in Farmington, Conn., from 1988 to 2000.

Through all of her activity, Missy has managed to maintain an active family life with her husband, Peter, and three daughters, and to keep her game intact. She remains an avid competitor, still competing for Piping Rock on the WMGA Team Matches each spring, and continues to officiate at MGA and USGA events.  When asked what she thought about receiving the award, Missy replied, “I have enjoyed serving the game for many years now and have certainly gotten back far more than I have given. I thank the MGA for this award and am truly honored to be in the company of those who won it in prior years.”

Career, family, countless hours of service to the game—no matter what the task has been, Missy Crisp has been up to it, and the game of golf is the better for it. She is most deserving of the MGA’s most prestigious award.

The award will be presented at the 115th MGA Annual Dinner on Wednesday, December 5 at Westchester Country Club in Harrison, N.Y. For more information on the 2012 MGA Distinguished Service Award, please contact Greg Midland (gmidland@mgagolf.org) or Jim Landers (jlanders@mgagolf.org) at the MGA office at (914) 347-4653.