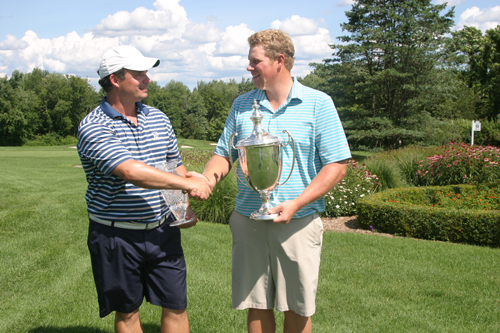 Trevor Randolph of Arcola, 8 & 7, in the finals at the 111th Met Amateur Championship at The Stanwich Club in Greenwich, Conn.

Wilson, who recently graduated from St. John’s University, took control of today’s 36-hole final early on, racing out to 7 up lead thru the first 9 holes. His MGA championship experience allowed him to weather the storm when Randolph seized momentum on the back 9 to erase Wilson’s lead down to 2 up.

Wilson kept his cool, though, and didn’t allow Randolph to take the lead at any point in the match. “I played well on the back nine, he just outplayed me for sure," Wilson said. "I just tried to keep my head in it and make good swings.”

That’s exactly what he did, which allowed the Andover, N.J. resident to finish his first 18 holes with a 3 up lead to put him in a comfortable spot to go back out on the course after a lunch break. His strategy for the afternoon 18 was to go out and be aggressive and not get too conservative even though he knew he was in the lead.

“I just tried to hit the shot that I need to and get to the center of the green, he said.”

Randolph, 40, put up a fight in his final match today but a few tough bunker shots hindered his efforts to catch up to Wilson. Randolph is an experienced match play player, having won the club championship at Congressional Country Club for the past three years in a row.  The former Rice University golfer (1991-1995) beat Max Buckley, one of the top players in the Met Area, in the first round in 21 holes. He also qualified for and played in the U.S.  Mid-Amateur in 2012. With his runner-up finish, Randolph earns an exemption into next year’s Ike and Met Amateur.

Much of Wilson’s success throughout the championship and especially today was due to his putting, which helped account for the five birdies he made in the 29 holes that he played today.

“I was really trying to focus on my putting speed," he said.  "Today my speed was really good and making good putts is really the key to match play."

The third St. John’s player to win the Met Am in the last four years (Ryan McCormick won in 2012 and Evan Beirne in 2010), Wilson is now exempt into the Met Open Championship at Old Westbury G&CC later this month, which he failed to qualify for earlier in the season.  With thoughts of turning professional, Wilson now has regained the confidence he needs to take the next step. Although he is still undecided on the timing, he has the rest of the season to work toward that goal.

Stanwich, which has hosted two Met Ams and a Met Open in the past, was an exceptional host for the four day championship, and the rolling layout and challenging greens were the ultimate test for these top amateurs. For the final round, the course played to a total of 7,262 yards at par 71. Thanks to our live scoring volunteers, everyone with an Internet connection was able to follow the action in its entirety.

Over 700 amateurs played in sectional qualifying for this year’s championship, which is the MGA's oldest. A starting field of 59 players went through 36 holes of on-site stroke play qualifying on Thursday, with the top 16 advancing the match play. The Met Am will be played at The Creek Club in Locust Valley, N.Y. in 2014.