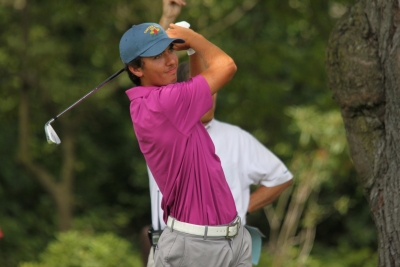 SPRINGFIELD, N.J. (July 31, 2013) – A spectacular second round of 1-under 71, which included a clutch birdie on the 36th hole, earned Ryan Rose of Ho-Ho-Kus, N.J. the 11th Carter Cup Wednesday at historic Baltusrol Golf Club in Springfield, N.J.

Impeccable weather and playing conditions greeted the field of 40 accomplished junior players. Following a solid 1-over 72 on the Upper course in his first round, Rose came roaring back with a 1-under 71, the lowest second round score of the day on the daunting 7,016 yard major championship course, finishing with a 36-hole total of even par 143.

A bogey on the par 417th didn’t derail his path to victory as he came back with a birdie on the 18th, highlighted by a beautiful 3-wood second shot putting him in prime position to go up-and-down from a few yards in front of the elevated green.

“It felt great,” said Rose, who will attend Rutgers University this upcoming fall. “At the time a few people were a couple under so I knew I had to give it a shot.”

Rose went after it from 260 yards out and it took a fortunate bounce, leading to the birdie that would eventually win him the trophy. The 18-year-old has made a name for himself already this summer, qualifying for the Ike, making the cut at the NJSGA Amateur and winning the Ridgewood Country Club Championship. He now has an exemption into next year’s Ike Championship.

“I haven’t been driving it too straight lately, I actually didn’t drive great today,” he said. “One thing that really helped today was my putting. That’s been one thing in the past couple years that has really helped my game out.”

Rose couldn’t celebrate too early, though, as players on the course were making moves to catch him. Defending champion Jared Mactas of Woodcliff Lake, N.J. birdied the 17th hole to pull within a shot of Rose’s lead. He hit a brilliant third out of a greenside bunker on the par 5 18th and lipped out a 6-footer that would’ve forced a playoff. His 144 total gave him a runner-up.

"The putt I thought I hit exactly where I wanted it just didn't break in," Mactas said.

Other top Met Area juniors had strong showings today, but the grueling Lower course proved to be too demanding even for the most accomplished 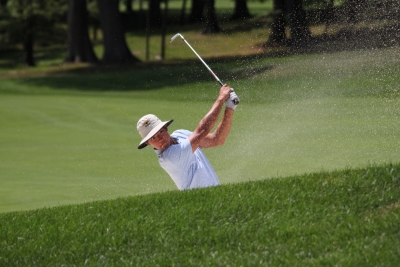 players in the event.

2012 MGA Boys champion Willis Huynh of Syosset, N.Y. fired a 36-hole total of 3-over 146, earning him solo third place. Coming off successful qualifying for the U.S. Amateur earlier this week, Jeremy Wall of Brielle, N.J. tied for fourth after having the first round lead, shooting 1-under 70 on the Upper. But Wall struggled in the second round, shooting a 5-over 77 for a 36-hole total of 4-over 147. Also finishing tied for fourth at was Jeremy’s brother Ethan with rounds of 72 and 75, Connor O’Brien of Norwalk, Conn., and Cody Cox of Milford, Pa.

The Carter Cup is played in memory of Michael P. Carter, an accomplished junior golfer who passed away in a car accident in 2002 at just 20-years-old. Michael was a junior club champion at both Baltusrol and Winged Foot Golf Club. Michael played for the Delbarton School golf team in Morristown, N.J., before joining the men’s team at Penn State University.

The Carter Cup is open to all male golfers not yet 19 years of age and who have not started college by July 31, 2013. Invitations are based on criteria set by the MGA Foundation Board of Directors, MGA Executive Committee and Baltusrol Golf Club.