Wilson, Buckley, and Shih Share Lead after First Round of Ike

Wilson, Buckley, and Shih Share Lead after First Round of Ike 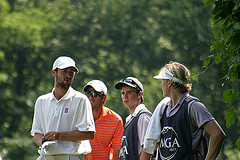 ued where he left off a year ago and fired a 3-under 69 to co-lead after the first round of the 58th Ike Championship at Wykgayl Country Club in New Rochelle, N.Y.

Wilson’s card included an impressive eight birdies to go along with five bogeys. Last year, Wilson broke the Ike record for the largest margin of victory (nine strokes) and shot a competitive course record at Atlantic Golf club (7-under 64) in the second round.

The rising Stanford University senior credited his low score today to making good decisions around the difficult, undulating landscape and not letting the scorching heat affect his game. “I’ve been playing very conservatively lately but not making many birdies,” he said. “But today was the total opposite, I was all over the place with birdies and bogeys.”

A total of 44 players made the cut today at 5-over 77 and will tee it up in the second and third rounds beginning at 7:30 a.m. on Tuesday.

Max Buckley of Westchester also finished at 3-under 69 after recording three birdies on his 10th, 11th, and 12th holes to lead the morning wave. Buckley noted that after getting off to a slow start with a bogey early on in his round, he was able to get a feel for the greens and started making birdies.

The Rye, N.Y., native is off to a hot start this summer, winning the NYC Amateur, the Anderson Memorial at Winged Foot, and was a pivotal member of the victorious MGA Carey Cup team.

Joining Wilson and Buckley at the top of the leaderboard is Harrison Shih of Alpine who was the third player to finish at 3-under 69. “I’ve been working on my short game a lot lately,” said Shih, who just finished his freshman year on the Columbia University golf team. It certainly paid off, as Shih notched five total birdies, three of them coming on the course’s five par fives. 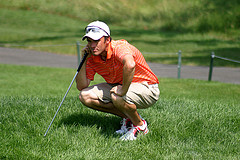 Mark Henderson of Saint Andrew’s, the 2012 MGA Mid-Amateur champion, posted a 2-under 70 to finish the day tied for fourth. Also at  2-under are 2012 Met Am champion Ryan McCormick of Suburban, and Matt Mattare of Bethpage, who fell to McCormick in the Met Am finals last year at Hollywood.

Right behind them at 1-under 71 are Stu Kaufman of Westchester, two-time reigning MGA Player of the Year Mike Miller of Knollwood, and two-time MGA major winner Greg Rohlf of Winged Foot (both majors came at Wykagyl).

Bradley Rock Jr. of Wheatley Hills and Danny Guise of MGA eClub – W/CT were the only two players to finish at even-par 72.  A handful of players are right in the mix at 1-over par 73, including recent Long Island Amateur champion Matt Lowe of Colonial Springs, St. John’s University golfer Dylan Crowley of Glen Cove, Dan O’Callaghan of Bedford, Christian Dolan of Timber Point, and Scott Mackesy of Winged Foot.

Buckley and Kaufman of Westchester are the current leaders for the Ike Team Championship. That trophy is awarded to the two members of the same club who combine for the lowest score.

The Ike Championship is the MGA’s premier amateur stroke play championship, and five sectional qualifying rounds were held to determine the championship’s final field. The beautifully manicured Wykagyl Country Club, which has hosted six previous Ikes, challenged today’s players with its extremely fast greens. It played to a par-72 of 6,657 yard.