Liu's Run at British Am ends in Semifinals

Liu's Run at British Am ends in Semifinals

UPDATED (June 21, 2013 - 11:45 a.m.) After a close match which was pushed to extra holes, Jim Liu was defeated on the 19th hole of the semifinals by Garrick Porteous of Bamburgh Castle. Liu had an impressive run, as he was the only American to make it as far as the Round of 16.

Full coverage of Liu at the British Amateur can be found here.

ELMSFORD, N.Y. (June 20, 2013) - MGA Carey Cupper Jim Liu of Smithtown, N.Y., has a brilliant run going in the British Amateur and will compete 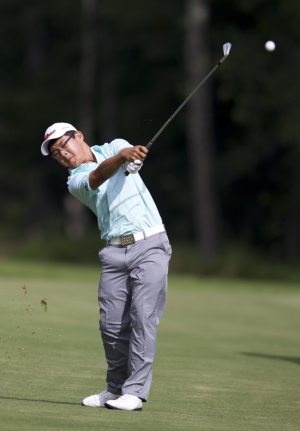 on Friday morning (2:15 a.m. EST) in the quarterfinals against Renato Paratore of Italy. The British Amateur is being played at Royal Cinque Ports and Prince's in Deal, Kent (site of two British Opens).

Liu, who helped the MGA team win their first Carey Cup overseas in April, is the lone American remaining in the field and was one of two to qualify for match play (he shot rounds of 72-74 to finish T30).

In 2012, Liu became the youngest player ever to win the U.S. Junior Amateur Championship at age 14 (breaking Tiger Woods' previous record of 15). He also finished as the runner-up in last year's U.S. Junior.

Liu is headed to Stanford in the fall where he will play with fellow MGA champion Cameron Wilson.