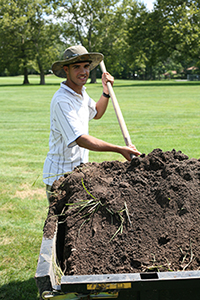 more than 230 young adults with meaningful employment this summer at about 75 Met Area golf clubs. The success of the GOLFWORKS program can be attributed to the willingness of MGA member clubs to hire deserving area teenagers, like Rock Spring Club in West Orange, N.J., which has incorporated GOLFWORKS interns into their staff since 2003. Supervised by Head Superintendent Chad Pirnos, this summer Rock Spring employed two GOLFWORKS interns that assisted Pirnos.

Marco Cutri of East Caldwell N.J. and Javier Tejada of Newark N.J. spent their summers working hard on the superintendent's staff.  Marco,18, participated in the GOLFWORKS program for his second year. He recently graduated from James Caldwell High School where he played soccer, basketball and ran track. In the fall he will be attending Ramapo College where he plans on pursuing a degree in international business.

Javier, also 18, completed his third summer as a GOLFWORKS intern. He has also worked at Weequahic Park and Essex County in previous years. Javier is attending Ramapo College this fall and he is planning on being a pre-med student with hopes of one day becoming a doctor.

Both Javier and Marco are golfers and played whenever they could on Mondays at Rock Spring.  They enjoy the people that they worked with and say that the hardest part of the job was working in the rain.

Marco and Javier have learned a lot from working at Rock Spring.  “Working in the golf industry has taught me responsibility and that hard work really pays off.” states Cutri “Everything is going great and I’m enjoying my time at Rock Spring”

About GOLFWORKS: Founded in 1994, the MGA Foundation’s GOLFWORKS program is designed to give its participants—high school aged students—exposure to the many career opportunities within the golf industry by providing meaningful summer work experiences. The young adults who participate in GOLFWORKS complete an internship in an environment that revolves around golf, which in itself can teach the lessons of honor, integrity and tradition and provides an activity that can be enjoyed for a lifetime. In addition, GOLFWORKS provides a good salary as well as networking opportunities to its interns, and a way for interns to learn the skills necessary to pursue their career interests.