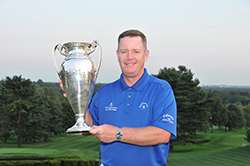 Club – Bedminster (N.J.) makes its debut hosting an MGA major on August 19 – 21. The MGA’s premier event will be played on the Old Course, opened in 2004 and the first of two outstanding golf courses built on the expansive property that was once part of the estate of auto magnate John DeLorean. Architect Tom Fazio designed this outstanding test of physical and mental skill that should provide the 142-man field of the Met Area’s best professionals and amateurs with a true test of championship golf.

This year’s field is highlighted by 15 past champions looking to add their names once again to the coveted Walter M. Trammell trophy alongside such greats as Byron Nelson, Gene Sarazen, Johnny Farrell and many other legends, past and present.  Among them is defending champion and two-time Met Open winner Mark Brown of Tam O’Shanter, who won last year’s event at Old Westbury in a three hole playoff over amateur Cameron Wilson of Shorehaven, and established the second longest period between Met Open victories at 14 years (1999-2013). Wilson will be back and gunning for another shot at the title, this time as a professional, and looking for a share in the $150,000 purse. Wilson graduated from Stanford this spring and turned pro just after winning the NCAA Individual Championship and playing in the U.S. Open at Pinehurst. He has since played in two PGA TOUR events and would like nothing better than to make the 2014 Met Open his first win as a professional. Another Wilson will be making his first showing in the Met Open as a professional – 2013 Met Amateur champion Pat Wilson of Panther Valley also joins the field and after his impressive play in 2013 will be hoping to break through with a strong finish to jumpstart his professional career.

No doubt both Wilsons will hope to be at least as successful as last year’s rookie Mike Miller of Knollwood, who returns to the Met Open fresh off his first professional win at the New York State Open at Bethpage - Black in July. Miller made an impressive professional debut at last year’s Met Open at Old Westbury carding a superb final round 67 that vaulted him into third place and a $15,000 paycheck. In 2012 he also finished in the top-10 as an amateur at Plainfield, so the two-time MGA Player of the Year is hoping the third time’s the charm when he takes to the tee at Trump. Miller will be playing alongside this year’s Met PGA Head Pro Champion, Matt Dobyns of Fresh Meadow, as well as amateur Max Greyserman of Crestmont, this year’s New Jersey State Open champion. 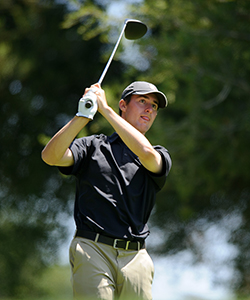 Just back from a trip to Valhalla for the PGA Championship are three veteran players who could add another win to their already stellar careers at Bedminster: Jim McGovern (1987 as an amateur) of White Beeches, Frank Esposito Jr. of Brooklake and Rob Corcoran of Poxabogue Golf Center. McGovern finished in the top-5 last year at Old Westbury, and all three players were in the top-20 at the PGA Professional National Championship to earn them a spot in the field at Valhalla.  Corcoran’s best finish this summer came at the New York State Open where he tied for fourth. Esposito, one of New Jersey’s most consistent winners, will be looking for his fourth win of the season, after taking home the NJPGA/NJSGA Senior Open, the NJ PGA Head Pro Championship, and the NJPGA Match Play Championship. Esposito has a great record in the Met Open and is still a threat to take the top prize.

As Cameron Wilson showed last year, the Met Area amateur contingent can mount a formidable challenge in a field of talented professionals. Some of the best amateurs in the Met Area will tee it up at Trump and any number of them have a chance to become the eighth amateur in history to win the event. Topping that list is 22-year-old David Pastore of Greenwich, Conn., who is looking to become the first player since Johnson Wagner in 2002 to win the coveted “Met Slam.” Pastore, the 2014 Westchester Open champ, won the Ike in come-from-behind fashion at Montclair Golf Club in June, and captured the Met Amateur in style with a history-making hole-in-one on the 35th hole to defeat Matt Lowe 3 & 1 for the title. If he can win the third leg of the “Met Slam” at Trump – Bedminster, he and Wagner would be put into an elite class of their own as the only two players to win all three MGA majors in the same season. “To win all three in the same year, including the Met Open, I think only 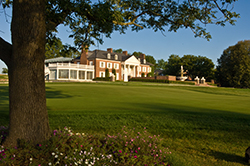 Johnson Wagner’s done it,” Pastore said at the Met Amateur, “I’m definitely aware of it.” The now five-time MGA Champion (2009 and 2006 Met Junior, 2010 Carter Cup, 2014 Ike and Met Am) would love to add a sixth trophy to the case, but he’ll have to do it against one of the best Met Open fields in recent memory.

Leading the way for the young guns is Cameron Young of Sleepy Hollow, who tied for fifth at last year’s Met Open and who at 17 is already looking to make his third appearance in the final group of Thursday’s round. The two-time MGA Champion has been showcasing his talent in national events throughout the summer including the U.S. Junior Amateur and U.S. Amateur. He was also recently named to the U.S. Junior Ryder Cup Team as a captain’s pick. A win at Trump would make him the youngest winner in the event’s history. Amateur talent runs deep in this year’s field and also includes an impressive balance of new and veteran players including two-time MGA Player of the Year Joe Saladino of Huntington, 2010 MGA/MetLife Public Links Champion Brian Komline of Black Oak, and 2003 Met Amateur Champion Mike Stamberger of Spring Lake. Among the younger contingent are Max Buckley of Westchester (the 2013 MGA Player of the Year is expected to make his professional debut at this year’s Met Open), 2013 Ivy League Player of the Year Sam Bernstein of Century, 2010 U.S. Junior Amateur Champion Jim Liu of Stonebridge, 2014 Carter Cup Champion Erick Alonso of Darlington, and 2014 Met Junior champion Dawson Jones of Darlington.

The Met Open, contested at 54-holes of stroke play with a cut made to the low 60 scorers (and ties) after 36 holes, was first played in 1905 at the Fox Hills Golf Club on Staten Island. The championship quickly established itself as a “major tournament,” and until World War II, it drew top professionals from around the country, partly due to its rich purse.  Post-WWII, the Met Open became more of a regional championship and was won by professionals such as Claude Harmon, Jim Albus, Bobby Heins, Darrell Kestner, and amateurs George Zahringer, Jerry Courville Sr., Jim McGovern, Andrew Svoboda, and Johnson Wagner.

Hosting its first MGA Championship, Trump-National Bedminster’s Old Course will be a demanding test for the talented field. Donald Trump founded the Bedminster property, home to both the Old and New courses, in 2002. It wasn’t long after the club was opened in 2004 that the Old Course was named a Top 100 Golf Course by Golf Magazine in 2005 and was chosen as one of America’s Best New Courses by Golf Digest in 2006. The course has already hosted the 2009 U.S. Junior Amateur and was recently announced as the site of the 2017 U.S. Women’s Open and the 2022 PGA Championship.

The MGA will conduct live scoring throughout the three-day event, including 9 and 18-hole scoring during the first and second rounds, followed by hole-by-hole scoring for the majority of the final round on Thursday. Full coverage, records, and history of the Met Open Championship can be found at www.mgagolf.org and follow @MGA1897 on Twitter for updates throughout the event.