DENVILLE, N.J. (July 15, 2014) – The Met Area’s top junior golfers battled through a rain delay and humid conditions at Rockaway River Country Club today to determine the match play portion of the 97th Met Junior Championship sponsored by MetLife. 62 players battled for 16 spots by playing 36 holes of stroke play and two players medaled with 5-under totals of 139. This is the first time in 96 years the format has included on-site stroke play qualifying. In previous years the top 64 from sectional qualifiers and exemptions would make match play.

Former MGA/MetLife Boys Champion Matthew Lowe of Farmingdale, N.Y. fired rounds of 71 and 68 to grab one of the top seeds in the bracket. Tying Lowe was Christopher Gabriele of Cold Spring Harbor, N.Y. with rounds of 70 and 69. 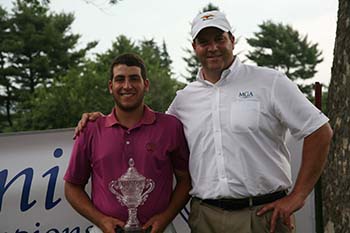 “I hit a lot of fairways and a lot of greens, which is the key to success, obviously,” Gabriele said. “I’m saving the putts for tomorrow.” Gabriele likes his chances in the final 16 because he believes he is pretty solid when it comes to match play. “It’s not 64 anymore, it’s 16, which makes it a lot easier to get to the championship match and that’s always the goal” he said.

Christian Cavaliere of Katonah, N.Y. and Christopher Troy of Greenwich, Conn. tied for third after carding 36-hole totals of 4-under 140. Cavaliere led after the first round thanks to a 5-under 67, which featured an eagle on the 382-yard par 4 8th hole. He then fired a 1-over 73 in his second round. “Overall I hit it pretty well,” Cavaliere said. “I’m pretty happy with how I played.” As for the eagle, he figured it was going to happen. “I was sticking it close all day so it was bound to happen at some point,” the confident 16-year-old said. It was a 270 yard 3-wood off the tee and a pitching wedge in from 110 yards that earned him the elusive two on a par 4.

Troy, who will be heading to Cornell in the fall, shot rounds of 69 and 71. “The course set up really well, it was definitely a little wet,” Troy said. “Other than that it was definitely fun to play - the greens are nice.” The 18-year-old will be playing in his final Met Junior and hopes to go out with a bang. “I’m playing really well lately,” he said. “Once the putter gets hot I think I have a really good chance.”

“It was my first 36-hole hold round,” Han said. “The rain delay helped me out. I got a little rest.” Han’s last nine holes of the day featured birdies on 15, 16, and 17, and a par on the long par 5 18th earned him his second 72 of the day. The young kid has no problem taking on his older counterparts, even if he is 30 yards behind them off the tee. “I just try to swing within myself, I didn’t care that they hit it 30 or 50 yards further than me,” he said. “You should hit your 3-wood as accurate as they hit their 7-irons, that’s what I try to shoot for.” Han clearly doesn’t let the age factor bother him and if he keeps this up he could become the youngest champion in Met Junior history.

Tomorrow the match play portion of the tournament will begin. The final 16 will be paired against each other based off of their scores today in a bracket format. Follow all the coverage of the 97th Met Junior Championship Sponsored by MetLife at mgagolf.org.