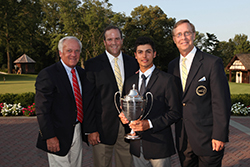 Erick Alonso of Haworth, N.J., claimed the title and won by one stroke with a 36-hole total of 3-under 141 over Jeremy Wall of Brielle, N.J., and Matt Lowe of Farmingdale, N.Y., who had matching scores of 2-under 142.

This is Alonso’s first MGA win and it made him think back to his first Carter Cup appearance five years ago. “I first played (in the Carter Cup) when I was 13 years old and I finished nearly last,” Alonso said while laughing. “It feels good in my last year to get the win.” This Carter Cup was only Alonso’s second and he will be going out with a bang. The 18-year-old is off to St. Leo University in Florida in the fall, but not before he makes a stop in Long Island this week at The Creek for the Met Amateur and at Trump – Bedminster in late August for the Met Open.

After an opening round 3-under 69 on the Upper Course, Alonso struggled on his first few holes in his second round on the Lower Course, until the par 5 seventh hole. “I chipped in for eagle on 7and it just got my round going,” he said. The eagle came at just the right time and he followed it with four birdies on the back nine, including a two-putt birdie on the 18th that eventually sealed the victory. “It feels awesome looking at those names and where they are now,” Alonso said of past Carter Cup Champions. “It’s nice to have this on your resumé.” 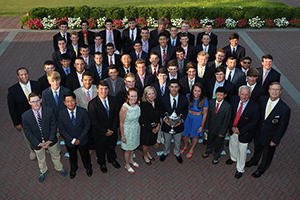 N.J., carded a 3-under 69 in his opening round and coming down his 36th hole he was tied with Alonso for the lead. Wall was even through his first 17 holes on the Lower Course but an errant drive on 18 led to 15-foot must-make par putt that he left just short. He finished with a 1-over 73 for a total of 142, just a stroke away from a playoff. “It kind of just summed up the whole day,” Wall said of the putt on 18. “I had a lot of good opportunities to make putts and everything was a foot short and to leave it a couple inches short on the last hole is just a tough way to end.” No one wants to come up just short, but the resilient Wall is looking ahead to the Met Amateur and Met Open and said he wouldn’t have changed how anything happened today. After the summer he will tee it up for the golf team at Loyola Maryland.

Also shooting a total of 2-under 142 was 2010 MGA/MetLife Boys Champion Matt Lowe of Farmingdale, N.Y.  This was Lowe’s sixth and final Carter 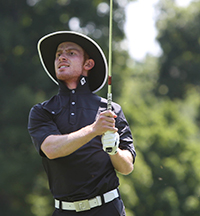 Cup as he heads to Richmond this fall. “This is my favorite tournament of the year,” Lowe said, “I’m kind of sad to be leaving.” Although Lowe never finished first, he was always in contention and today was no different. He shot even par in the morning on the Upper Course and 2-under on the Lower Course thanks to an outstanding eagle on the par 5 18th .

Thomas LaMorte of Haworth, N.J., finished at 1-under 143 to come in solo fourth. LaMorte has had an outstanding summer, tying for 7th at the Ike and qualifying for the U.S. Amateur at Tuxedo in a playoff.

Christopher Troy of Greenwich, Conn., broke Carter Cup records when he got off to a hot start this morning and shot a 7-under 65 on the Upper course, breaking the championship’s record for the lowest 18-hole score previously set by Sean Kelly and Cameron Wilson in 2009. Troy, headed to Colgate this fall, also broke the competitive course record for the Upper Course with that 65.

The Carter Cup is played annually in remembrance of Michael Carter, a talented junior player who unfortunately passed away in a car accident at just 20 years old. Michael Carter was the junior club champion at both Baltusrol and Winged Foot, and he played for the Delbarton School in Morristown, N.J., and Penn State’s golf team. The event is played in his memory.

The list of Carter Cup past champions boasts powerful names, including Morgan Hoffmann, Chris DeForest, Cameron Wilson, Max Buckley and Cameron Young. Entry into the final field is invitation only, and routinely features the top juniors in the area. Players are eligible to play if they are not yet 19 years old and have not yet started college. The championship has grown into one of the most prestigious junior events in the country.