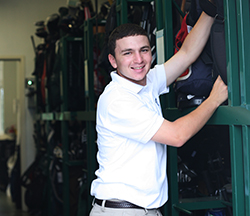 employment at Met Area clubs to more than 230 deserving high school students. Now in its 20th year, the success of GOLFWORKS can be credited for the willingness of MGA member clubs to hire teenagers, many whom have little or no work experience. J.D. Barnett is a GOLFWORKS graduate who had his first opportunity to work through the program at Century Golf Club in Purchase, N.Y. After one year in the program, Barnett is now moving on to the next stage of his life – college – and credits his internship for helping him prepare for the future.

J.D., 18, recently graduated from Harrison High School, and currently in basic training at the United States Naval Academy. This fall, he will begin studying to become a nuclear engineer. He will be missed at Century this summer, where he was extremely popular among the members and staff including head pro Nelson Long and caddie master Justin Blass, who both served as J.D.’s GOLFWORKS supervisors

“It was my first job and I’ve never done anything like that before,” said Barnett. " It was good experience getting used to that sort of lifestyle and being around the country club environment."

J.D.’s responsibilities through his GOLFWORKS internship were maintaining the bag room as well as the club’s practice areas. In addition, he took a liking to caddying on the days he was not scheduled to work. Barnett says his experiences at Century, like showing up early, managing his time and keeping members happy, will ultimately help him as he enters the military.

“Learning discipline here last year let me know I can deal with this and let me know it’s not something I need to shy away from,” he said. “It comforted me a little bit knowing I had some experience.”

J.D. plays golf himself and was able to take advantage of Century’s employee playing privileges on most Mondays. He hopes to continue playing when he gets to the Naval Academy, but know his opportunities will be limited.

“I’d love to play when I can, but I’m not sure how much time I’ll have,” said Barnett. “I am going to focus on school first, but I definitely want to keep playing.”

Click here for more information about the GOLFWORKS program.