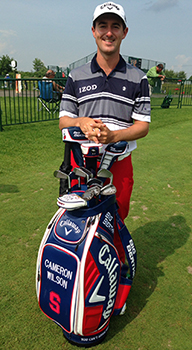 Wilson of Rowayton, Conn. will be making his professional debut at The Travelers Championship this week at TPC River Highlands in Cromwell, Conn. The 7-time MGA champion disappointingly missed the cut again at the Open (78-70, +8) despite hitting 30 of 36 greens in regulation, which led all players who failed to make it to the weekend. Wilson will join one of the strongest fields in Travelers Championship history including the likes of Keegan Bradley, Jason Day, Sergio Garcia, and Bubba Watson.

With the addition of Wilson to the field the Travelers continues its commitment each year to granting exemptions to young rising stars. He will be playing the tournament in his home state and following in the footsteps of other young talent like Morgan Hoffmann, Rickie Fowler and Webb Simpson who were once exempt into the Travelers field as future stars themselves. Now as a professional, Wilson will compete for a $6.2 million purse along with over 150 PGA Tour players, including four of the world's top 10 players in the official world golf ranking. The tournament will be played June 16-22 and for full coverage you can visit www.travelerschampionship.com.