Wilson and Dobyns take on Pinehurst

Wilson and Dobyns take on Pinehurst 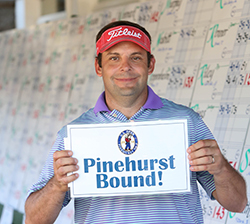 Matt Dobyns, 36, was one of the qualifiers at the Purchase, N.Y., Sectional Qualifying Round. This is the first U.S. Open for the Head Professional at Fresh Meadow. In 2012, Dobyns set records when he won the PGA Professional National Championship by 8 strokes. This year was only the second year that he has played in Sectional Qualifying. Although Dobyns had success on the local and national levels before (he won the 2013 LIGA Open and right before the Sectional he won the POLO Golf Met PGA Head Professional Championship), he said that playing in the U.S. Open is a whole other story. "For the level of golf that I play, competing in the Majors is my goal. If I play well, I’ll be happy about that. I’ll smile no matter what happens there,” he claimed post-round at the Sectional. Dobyns, the only PGA club professional in the field, is paired with amateur Robby Shelton and Brady Watt. They tee off on Thursday at 8:46 a.m.

Amateur Cameron Wilson, the newly crowned NCAA Individual Champion and seven-time MGA winner from Rowayton, Conn. finished as the first alternate at Old Oaks and Century. He was among the last five players added to the U.S. Open field. Wilson, the 2009 MGA Player of the Year, found himself in a playoff with web.com Tour player Jamie Lovemark to determine the altnerate positons. On the 6th playoff hole, Wilson made a birdie to earn the first alternate spot. In 2012, he was the medalist at the Sectional Qualifying at Canoe Brook which earned him a trip to the U.S. Open at the Olympic Club, but ended up missing the cut. The 21-year-old recent graduate from Stanford plans to turn pro and play in the Traveler's Championship on a sponsor's exemption the week after the U.S. Open. Wilson's friend and fellow MGA winner Tommy McDonagh will caddie for him at Pinehurst this week. Wilson is one of 12 amateurs in the field and he tees off in the first group of the day on Thursday at  6:45 a.m. with Daniel Berger and Brett Stegmaier.