ELMSFORD, N.Y. (April 27, 2015) - Both the Metropolitan Golf Association and Winged Foot Golf Club have storied histories that will meet again this summer for an MGA record seventh time when the 100th playing of the Met Open takes place on the club's East Course. We continue to celebrate the milestone with our series of Met Open Moments, with this week's photo coming from the 1992 Met Open at Nassau Country Club in Glen Cove, N.Y. In the photo is that year's champion Mark Mielke of Mill River, with a host of trophies he added to his collection that year.

At the time Mielke was the head professional at the Lawrence Golf Club and quickly become a household name on the Met Area circuit. A month 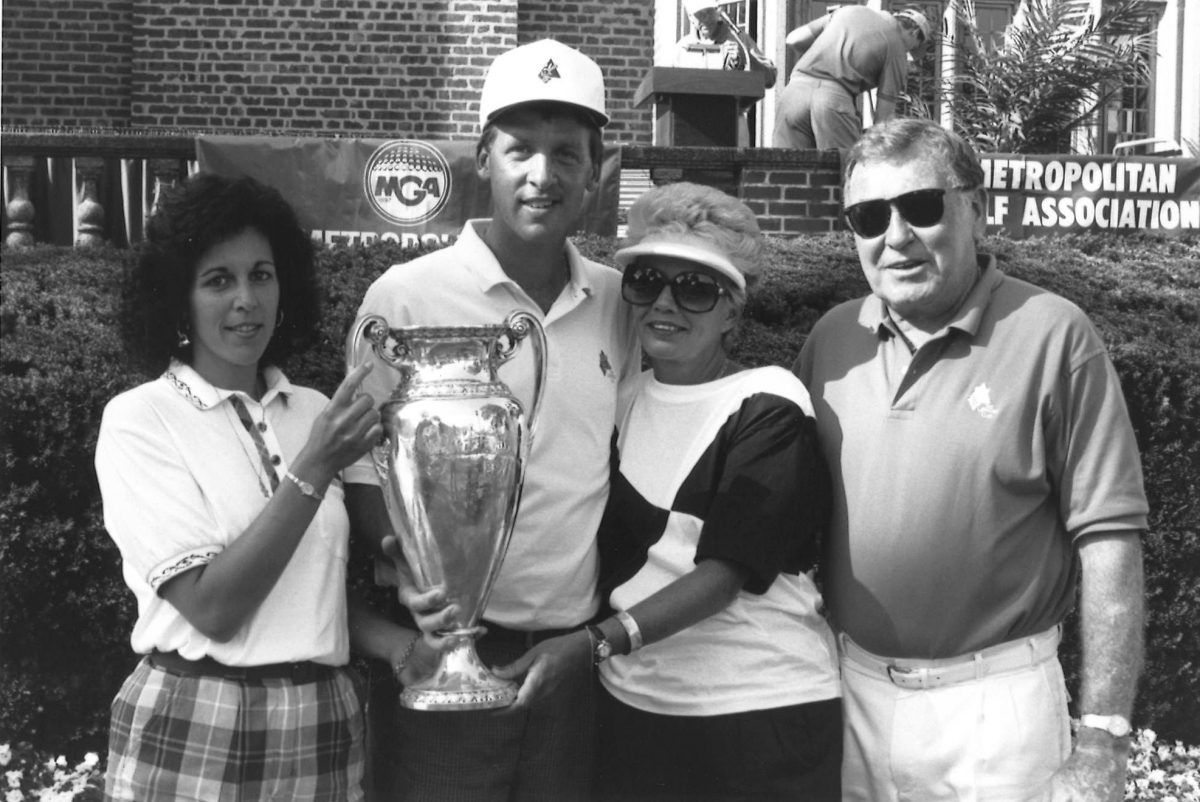 prior to the Met Open, the 30-year-old Mielke had claimed the New York State Open, and with the win at the Met Open at Nassau, Mielke became the first player in the history of the Met Open to win both those events in the same year. The feat has since only been accomplished by two players, Mark Brown in 1999, and Danny Balin in 2012. That at least explains two of the trophies. The third came from his victory at the Met PGA Championship that same season. It was the year of Mielke, and perhaps the one it all came together. He had previously won as an amateur for the first time in 1987 at the MGA/MetLife Public Links Championship, and was able to capture the 1991 Long Island Classic. But in 1992, he took over the golf scene in the Met Area, winning three of its more well known events.

Winning the Met Open takes 54 holes of incredibly steady golf, but it was two huge putts on the final three holes that may have gotten Mielke the victory. Right on Mielke's tail was Rick Vershure, who trailed by just one stroke heading into the final round. Vershure was already an accomplished player himself, having won the 1987 Met PGA Championship, the 1991 WGA Open and the 1990 National PGA Match Play Championship. Heading to the 16th tee Vershure held a three-shot lead, all but sealing Mielke's fate as runner-up. Mielke was able to hit his on the green on the 175 yard par three, and Vershure's tee shot came up short. Vershure would bogey and Mielke would roll in an outstanding birdie putt from 34 feet, quickly narrowing the gap to a one stroke deficit. Vershure would go on to bogey the 17th, with Mielke staring down a 51 footer for birdie to take a one shot lead.

"They told me the putt took nine seconds to go in," Mielke said in a 1992 New York Times article by Alex Yannis. "I just wanted to two-putt, but I got lucky and it went in."

Just like that the NY State Open champ was leading and just needed to match or beat Vershure's score on the final hole for victory. He would do just that and both players would card final round 69s, giving Mielke the one-shot win and the biggest check of his career to that point of $15,000. In the same NY Times article, Mielke spoke of the importance of the Met Open.

"Winning the State Open and now the Met Open is great," he said. "It's a feeling I can't describe because the competition is so fierce."

Since then Mielke hasn't slowed down, tacking on another win at each of the three events he claimed in 1992. He won is second Met PGA Championship in 2001, his second NY State Open in 2003, and his second Met Open in 2008 at Fairfield, which gave him the record for longest amount of time between wins in Met Open history.