UPDATED (May 5, 2015) - The match play round of 32 featured three Met Area duos yesterday at the U.S. Amateur Four-Ball Championship at The Olympic Club in San Francisco, CA., who looked to grab a spot in the round of 16. Only one team was able to make it through, the 29th seeded Doug Kleeschulte and Jeffrey Schaller of Kingston, N.Y. The team just got into the match play portion of the tournament by one shot, and have taken full advantage. Schaller and Kleeschulte had an incredibly difficult matchup against the 4th seeded team of Jordan Nasser of Irvine, CA. and Taylor Wood of Rancho Santa Margari, CA., but it was no problem for the Kingston, N.Y. pair. They won 4 & 3 in convincing fashion and remain the only Met Area team left in the inaugural event. Today they will face off against 13th seeded Scott Harvey of Greensboro, N.C. and Todd Mitchell of Bloomington, IL., at 7:24 a.m. pacific time.

Trevor Randolph of Wyckoff, N.J. and his partner Keith Unikel of Potomac, Md., had an excellent two days of stroke play and earned the 12th seed in the round of 32. They battled against 21st seeded Jake Yount of Danville, CA., and Tim Mickelson of Scottsdale, AZ., but were unable to advance to the round of 16 and lost 2 & 1. Roger Hoit of Summit, N.J. and Austin Eaton of Lakeville, Minn., found their way into the round of 32 via an 8 for 3 spots playoff prior to the match play early yesterday morning. They were able to birdie the first playoff hole and grab the 30th seed, which left them with the tall task of taking down the 3rd seeded team of Kyle Suppa and Kyosuke Hara of Honolulu, HI. Hoit and Eaton gave them quite the match, but eventually lost 3 & 2.

UPDATED (May 4, 2015) - Two days of stroke play are complete at the U.S. Amateur Four-Ball Championship at The Olympic Club in San Francisco, CA. and the Met Area will still be represented heading into the match play round of 32 beginning today. Two of the host of Met Area duos are already safe and into the round of 32, while a third duo is getting ready for an 8 for 3 playoff beginng at 7 a.m. pacific time.

Punching their tickets with ease into match play were Trevor Randolph of Wyckoff, N.J. and his partner Keith Unikel of Potomac, Md., with a score of 5-under 135. That tied them for eighth, well within the cut line and just five shots back of the medalist team. While they were able to grab four birdies their opening round, three bogeys saw them finish at just 1-under on day one. It would be their second round of 4-under 66 that allowed them to coast into match play. The 5-under score was good enough to get Randolph and Unikel the 12th seed, pitting them against the 21st seeded team of Jake Yount of Danville, CA., and Tim Mickelson of Scottsdale, AZ. That match will go off today at 10:12 a.m. pacific time.

Also gearing up for the round of 32 thanks to qualifying with a score of 2-under 138 are Doug Kleeschulte and Jeffrey Schaller of Kingston, N.Y. The pair carded a 2-under 68 on day one and followed it up with an even par 70 to tie for 25th, which was good enough to grab the 29th seed in the match play round. They will have a difficult matchup in the first round against the 4th seeded team of Jordan Nasser of Irvine, CA. and Taylor Wood of Rancho Santa Margari, CA., who tied for third at 7-under. The match will tee off at 9:36 a.m. pacific time.

Eight teams tied for 30th at 1-under par and will have a playoff for the final three spots in the round of 32. One of those teams is the pair of Roger Hoit of Summit, N.J. and Austin Eaton of Lakeville, Minn. The team came up big in the clutch carding a final round 2-under 68 to get a spot in the playoff, and will need to pull off some more magic to get into the round of 32. The playoff begins this morning at 7 a.m. pacific time.

which begins Saturday, May 2 at The Olympic Club in San Francisco, CA.

In 2014, the MGA conducted two sectional qualifying rounds for this championship and some of the Met Area’s top amateurs earned the opportunity to compete at a national level and participate in this new championship.

When the USGA first unveiled their introduction of this tournament to their lineup of competitions, the USGA Vice President and Championship Committee Chairman, Thomas J. O’Toole Jr., expressed his excitement about this development saying, “Because the four-ball format lends itself to spirited team competition and aggressive risk-reward shot making, we are confident these championships will deliver exciting amateur golf to the national stage for both players and spectators alike.”

The Met Area, especially, is very fond of a Four-Ball format and is well-known for its highly competitive, local Four-Ball Invitationals, including the Wilson Cup, played at Scarsdale Golf Club, the Courville Invitational at Shorehaven Golf Club, the Metedeconk Invitational hosted by Metedeconk National Golf Club, and the most highly acclaimed, the Anderson Cup hosted by Winged Foot Golf Club. The Anderson Cup is one of the foremost invitational events in the country, which makes it no surprise that Winged Foot’s East Course is set to host the 2016 U.S. Amateur Four-Ball. This year, the East Course will host the 100th Met Open Championship in another historical event. 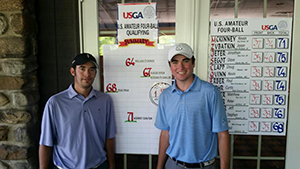 A strong contingent of Met Area players will head to San Francisco, including the team of Steven Zychowski of Mendham, N.J., and Sam Wallach of Randolph, N.J., who shot a 6-under 64 at the MGA conducted qualifier at Paramount Country Club in September.

The Wallach-Zychowski team has been playing together since their junior golf days and competed in the New Jersey State Four-Ball last August, where they finished as semifinalists. Zychowski is a continual force in MGA competitions, finishing as a quarterfinalist in last season’s Met Amateur at The Creek and finishing in the top ten at the Ike Championship at Montclair. He is also an integral competitor in many New Jersey competitions, finishing tied for second at the New Jersey State Amateur and representing New Jersey in the USGA State Team Championship in Indiana. In addition to that National Championship, Zychowski has competed in four U.S. Amateurs in the past 5 years, showing that he’s certainly ready to take home his first National Title.

Three teams earned a ticket to California after qualifying at Cherry Valley in October. The medalist team, Ken Bakst of New York, N.Y. and Jon Doppelt 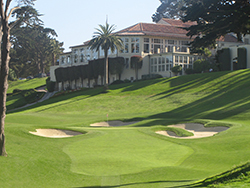 Ken Bakst, of course, is no stranger to national championships -  he won the U.S. Mid-Amateur in 1997, competed in the 1998 Masters, and has made a number of appearances in both the U.S. Amateur and U.S. Mid-Amateur.

Bakst is also the 1996 Met Amateur Champion and has since won two Father and Son Championships with his son William in 2011 and 2012.

His playing partner, Jon Doppelt, is a veteran competitor as well. He won the 1997 LIGA Amateur and the 1988 Wilson Cup, a highly-competitive and acclaimed four-ball invitational at Scarsdale Golf Club. Doppelt is a regular competitor in four-ball events, finishing 2nd and 5th at the Wilson Cup in 2010 and 2011, respectively.  He’s also a four-time semifinalist in the Anderson Invitational. 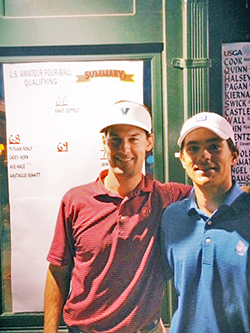 Two teams survived a playoff to earn the remaining qualifying positions after finishing at 4-under 68 at Cherry Valley. Conor Casey of Madison, N.J., and Griffin Kern of New York, N.Y., will team up to play in their first USGA championship.  In 2014, Casey won the Father and Son Championship with his father, Kevin. He also finished T-10 in the 2014 Metedeconk Invitational.

The second team to qualify in the playoff was James Mastaglio and Timothy Schmitt, both of Garden City, N.Y. The 2004 Travis Invitational Champion, Schmitt has competed in two U.S. Amateurs and was a member of the 2005 MGA Carey Cup team.

2014 New Jersey Mid-Amateur Champion Trevor Randolph of Wyckoff, N.J., qualified with teammate Keith Unikel of Potomac, Md., at the qualifier held at Hackensack Golf Club, the first qualifying round for the USGA event. Randolph is a consistent top-player in MGA events and was captain of the New Jersey USGA State Team (and teammate of Zychowski). He was also a member of 2014 MGA team competing in the French-American Challenge. Randolph experienced playing in National Championships, when he qualified for the Round of 64 in the 2014 U.S. Mid-Amateur.

Sam Bernstein of New York, N.Y., a member of the MGA’s 2014 French-American Challenge Team, also qualified at Hackensack with Greg Shuman, also of New York, N.Y. In the 2014 season, Bernstein won the 2014 Arcola Cup, finished as runner-up at the Ike, and was a semifinalist at the Met Amateur.

Not only are some of the top Met Area players taking part in such a historic event, but the MGA’s own Managing Director of Rules, Competitions and GHIN Services, Brian Mahoney has been invited to serve on the Rules Committee. Mahoney will serve as a Rules Official through stroke play and through the first day of match play.

The U.S. Amateur Four-Ball and U.S. Women’s Amateur Four-Ball (May 9-13 at Bandon Dunes Golf Resort in Bandon, Oregon) will consist of 128 and 64 two-player teams respectively, each playing their own ball throughout the round. Each team’s score will be determined using their better-ball score for each hole.

The format for the championship is 36 holes of stroke play over the course of two days beginning on May 2, played on the Ocean Course. The field will then be cut to the low 32 teams who will advance to match play. Five 18-hole rounds of match play, beginning on Monday, May 4, will determine the champion.