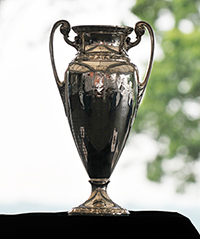 at's coming in 2015 truly will be one of the most special MGA seasons in recent memory. Highlighting the summer season will be the premier event, the Met Open Championship, the country's third oldest open championship behind only the U.S. and Western Opens. Throughout the rest of the year up until the historic playing of the event we will be paying homage to what is conisdered our greatest championship. The Met Golfer, Met Golfer EXTRA, and our website (mgagolf.org) will all play a role in looking into the history of the Met Open, digging up fun facts and pictures from the archives, and celebrating our past champions and host sites. This year's championship will be played on the East Course at Winged Foot Golf Club, who will be hosting the event for an MGA record 7th time, the last coming in 2002 when Johnson Wagner claimed his second consecutive title.

It all  began in 1905 at Fox Hills Golf Club and the event has flourished ever since, despite 10 years of no competitions from 1917-1918 and 1941-1948. Up until 1941 it was considered one of the "major tournaments" on the professional circuit due to the fact it offered one of the richest purses. It attracted top players and often saw its winner grab a spot on the Ryder Cup team. Today, without a doubt the best players in the Metropolitan Area show up year after year for a shot at the Walker L. Trammel trophy. Financial problems in 1941 caused the MGA to discontinue the event, until 1949 when it returned to Metropolis an Jackie Burke Jr. claimed the title by six shots over 7-time major champion Gene Sarazen. As the years have passed, the purse has increased steadily and today finishing in first earns you $27,500. Taking home that check last year in the 99th Met Open was Grant Sturgeon, an assistant pro from Winged Foot who will look to defend his crown on home turf this August.

In 2002 it was now 3-time PGA TOUR winner Johnson Wagner claiming victory by five strokes on Winged Foot's West course. It was Wagner's second straight Met Open victory, the first coming as an amateur at Bethpage Black the year prior. Before Wagner's victory in 2002 it had been 15 years since Winged Foot played host to the event. In 1987 amateur and now head pro at White Beeches and 1993 Shell Houston Open champion Jim McGovern earned the victory. That made McGovern the 4th amateur to win the event and the second one to do it at Winged Foot after Jerry Courville Sr. accomplished the feat in 1967. Other host years for the historic Mamaroneck, N.Y. club came in 1961 when Wes Ellis won the title, 1952 when another amateur, Chet Sanok, was victorious, and lastly the first time it was contested there in 1933, when Willie MacFarlane brought home the hardware.

The history of both the Met Open and Winged Foot will collide again August 25-27, for the championship's 100th playing, and it plans to not disappoint. It is a major highlight of a fantastic season that includes the Ike at Friar's Head, the Met Amateur at Baltusrol, and many more prestigious host sites and championships to be contested. It may be only January, but before you know it golf season will be in full swing and this year it promises to be the best yet, as always.