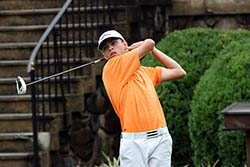 Riverhead, N.Y., for the 60th playing of the MGA’s Ike Championship on June 29-30. The MGA’s premiere stroke play event will be contested over two days and 54 holes on the beautiful and award-winning Long Island course, which is hosting its first Ike championship, and its second MGA major event (host of the Met Amateur in 2008).

Leading the field of favorites is 2013 MGA Junior Champ and 2014 Junior Ryder Cup Team member Cameron Young of Sleepy Hollow. Young just completed four successful years on the Fordham Prep team and is in great form as he prepares to join the Wake Forest squad this Fall. Before his 18th birthday, Young has already carded two top ten finishes in the Met Open and has to be considered the one to watch in this year’s event.

Joining Young will be a strong contingent from the collegiate ranks, and younger, including former MGA Boys champion Matt Lowe of Colonial Springs. Lowe, a University of Richmond golfer and runner-up at the 2014 Met Amateur finished tied for third in last year’s Ike and finished near the top in multiple events and is gunning for his first major win. He’ll be joined by James Nicholas of Westchester, the Yale bound golfer who just won the New York State Boys Championship; Jared Mactas of Paramount, the 2012 Carter Cup champion; brothers Jeremy and Ethan Wall of Manasquan River 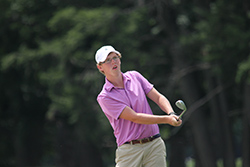 These talented young guns will be met by a number of worthy veterans with the talent and experience to take on the pressures of high stakes golf and championship play. These include newly crowned Hochster Memorial winner Brian Komline of Black Oak; 2014 New Jersey Amateur champion Mike Stamberger of Spring Lake;  two time MGA Mid-Am winner Niall Handley of Essex Fells and Trevor Randolph of Arcola, the 2014 New Jersey Mid-Am champion.

Perhaps the one player to watch most is Friar’s Head founder and managing member, Ken Bakst who not only has one of the most impressive resumes in the field –the 1997 U.S. Mid-Amateur and 1996 Met Amateur are amongst his accomplishments – but his intimate knowledge of Friar’s Head, which he painstakingly developed with architects Bill Coore and Ben Crenshaw will give him a unique home course advantage and earns him a top spot on the “Ones to Watch” list.  Ditto for ten-time MGA Player of the Year George Zahringer of Deepdale who has been winning local and national events for more than thirty years with no signs of slowing down as evidenced by his 2015 win in the MGA Senior Amateur. Zahringer has hoisted the Ike trophy five times (2007, ’04, ’01, ’93 and ’89) but with a chance to tie the Ike record of six wins with Jerry Courville Sr., he may be a man on a mission and more than able to handle the challenges of this year’s field. 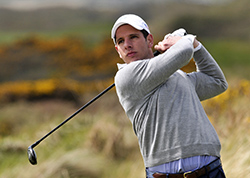 Friar’s Head in 2008; Sam Bernstein of Century who has finished in the top-five in the Ike for the last three years; and Gregg Angelillo and Nick Desai, both of Baltusrol. After caddying during his brother David’s Ike win last year, Paul Pastore of MGA eClub Westchester/Fairfield is hoping to keep the trophy in the family. Also looking for a return to glory will be Tommy McDonagh who won the 2008 Met Am at Friar’s Head defeating Saladino in the final of its debut event. McDonagh, a reinstated amateur, captured the 2011 Ike.

Friar’s Head, one of the top ranked golf courses in the nation, was built by Ben Crenshaw and Bill Coore with the goal of utilizing the surrounding water, sound dunes and wind to present a challenge to each player. The course has evolved since it first hosted an MGA championship with the Met Amateur in 2008, and is in peak condition ready to challenge the area’s top amateurs come June 29.

As noted, the Ike is contested over 54 holes, with a cut to the low 40 players (and ties) after 18 holes. The MGA held five Sectional Qualifying Rounds throughout the area to determine the final field.

The MGA will provide 9 and 18-hole scoring for Monday’s first round and Tuesday morning’s second round, followed by live hole-by-hole scoring for the groups playing in the final round on Tuesday afternoon. Full coverage of the championship, including photos, video, interviews and more can be found on www.mgagolf.org and on the My MGA mobile app.