ELMSFORD, N.Y. (May 28, 2015) - On Tuesday, May 26, Trump Golf Links at Ferry Point celebrated its official grand opening alongside owner 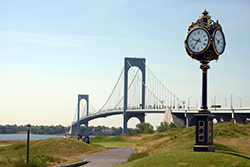 The project took nearly three decades to make and broke ground 17 years ago after Mayor Rudy Giuliani agreed to build the course on a marshland located on the East River. The project to build the public course cost a total of $269 million.

“Everybody knows that Jack is the greatest golfer that ever lived,” Trump said. “But a lot of people are just starting to find out he is one of the truly great golf course architects.”

The links style, public course is set with a top staff, including Brad Worthington as Director of Golf and Colin Igoe servcing as Assistant Professional. Michael Breed has set up shop to bring the world-class Michael Breed Golf Academy to the coruse.

Trump Golf Links at Ferry Point is located in the Bronx, N.Y., and overlooks the Manhattan skyline with a stunning view of the Whitestone and Throgs Neck Bridges along the East River waterfront. The course features many challenges from the windy breeze from the river, to the water hazards and hilly fairways across throughout each hole.

Trump Ferry Point began accepting tee time reservations for April 1 for its official first day of play. Earlier this month, the MGA hosted its 21st annual Day of Golf on May 12 to help promote for the future generations of golf.

Mike Davis of the USGA and Pete Bevacqua of the PGA of America have visited Trump Ferry Point after Trump and Nicklaus proposed ideas for a potential major championship in the future. Other future plans include a $10 million clubhouse that will be designed by Hart-Howerton by 2016.

This course is Trump's 17th course, and the third surrounding the New York City and Westchester area. It will host the PGA Tour’s first FedEx Cup playoff event, The Barclays in 2017.

With the official opening, any golfer has a chance to play New York City’s newest challenge. Weekday fees to play are $141 for local residents, and $190 for those outside the area.