Elmsford, N.Y. (June, 10, 2015) – On June 9 the Metropolitan Golf Writers Association held their 64th National Awards Dinner to honor individuals who have not only etched their name in golf history, but who have used their success to make a difference in the world on a larger scale.

The night was filled with laughter, tears, and captivating moments as special guests and award recipients shared their stories as to what got them to this point in their life. More than 500 guests in attendance got to hear first-hand to some of the most influential names in golf share their personal stories.

The Gold Tee Award, the highest honor bestowed by the MGWA, recognizes golfers who represent the tradition of golf, with former recipients the likes of Walter Hagen, Arnold Palmer, Tom Watson, and Fred Couples. This year’s recipient, Nick Price is the epitome of everything that golf encompasses. 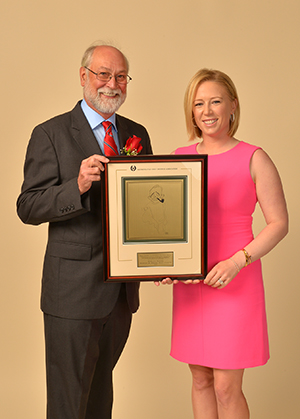 Throughout his acceptance speech, Price recalled his days as a rare golfer in his home country of Zimbabwe.  After sharing his favorites stories about his quick-witted mentor, Price ended his acceptance by remarking that he is most thankful for the tolerance and praise with which he was greeted starting out as a newcomer into the country many years ago. He shared that not only was he accepted, but he was regarded so highly in the golf world and couldn’t he more thankful for the respect that he has been given over the years in the eyes of everyone in the golf community.

As Gary Player accepted the Winnie Palmer Award on behalf of the The Player Foundation, he reminisced on his days as a young boy driven by faith and the hope of becoming a world-class golfer. With success on the course at the forefront of his endeavors, his focus on what he would do with his success has always remained a driving force for him as well.

At a young age, he vowed that when he was famous – “when being the integral word” - he was going to help those less fortunate in the world – a feat that, alongside his success on the course, he has undoubtedly accomplished through the 32 years and over 50 million raised by The Player Foundation towards those who long for the opportunities that many of us take for granted.

The Bing Crosby Tournament Sponsor Award was given to yet another golf star, Morgan Pressel, who has not only anchored herself as the 26th ranked golfer in the LPGA, but has made incredible headway for breast cancer research and development through the Morgan Pressel Foundation.

Pressel accepted the award in the memory of her mother, who lost her life to breast cancer at a young age, and went on to say that over the years she’s learned that although a bad round of golf can ruin a day, it’s not as life-and-death as is fighting cancer and she dreams of a world where women, and all people, can survive against the threats of sickness and spend more days out on the course.

As a way of showing just how much passion Sirak has for the game, he not only completed the “Grand Slam” for the PGA, but also the LPGA, solidifying him as a strong advocate in recognizing women’s golf alongside men’s as a leading sport. In addition, Sirak is highly regarded by players, such as Arnold Palmer, Jack Nicklaus, and Gary Player, and gives players the comfort of knowing that their stories are in the best hands that sports journalism has to offer.

Glen Oaks Club, in Old Westbury, N.Y. earned the Club of the Year Award, which was accepted by the club's president, Michael Mann. Glen Oaks is set to host the Met Open Championship in 2016 and was recognized for its outstanding efforts in charitable acts, endeavors in golf, and was raved about for the incredible culinary exports that it offers.

The Women’s Metropolitan Golf Association was awarded the Distinguished Service Award for their accomplishments in inspiring and advancing women’s amateur golf and junior girl’s golf.

The MGWA was formed in 1952 by Fred Corcoran, whose goal was to recognize golf journalists and provide scholarship funding for those eligible around the Met area. As of this year, it has raised $1.5 million for Caddie Scholarship programs and the Dave Marr Journalism Scholarship at Columbia University. 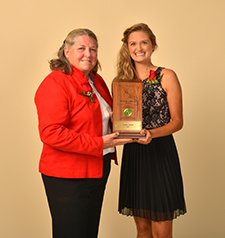 Lauren Childs, a junior on the North Greenville women's golf team, was honored with the Mary Bea Porter Award, which recognizes an individual in golf who, through an heroic act, saves or betters the lives of others. Childs was playing in a college tournament when she noticed an elderly man laying in his nearby backyard face down. With her quick thinking, she ran over to the man and administered CPR, helping to save his life.

Master of Ceremonies and President of the MGWA Bruce Beck hosted the evening's festivities, and none other than Madison Square Garden's John Amirante started the night with the National Anthem.

The MGWA's National Awards Dinner is the longest-running and often the largest golf dinner held annually in the United States. Proceeds from the dinner are distributed to three Metropolitan-Area Caddie Scholarship programs (long Island, Westchester, and New Jersey) and the MGA Foundation. To date, more than $1.5 million has been raised for these charitable endeavors. For more information on the MGWA, please click here.