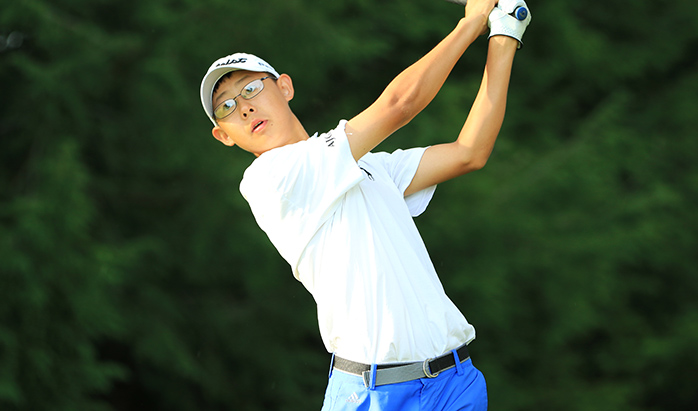 BEDFORD, N.Y. (July 28, 2016) – Reigning champion Nathan Han of Somers, N.Y., is one of four competitors who won a pair of matches Thursday at Bedford Golf & Tennis Club to secure a spot in Friday’s scheduled semifinals at the 48th MGA/MetLife Boys Championship.

Han’s day began with a challenging match against Nolan Forsman of Larchmont, N.Y. The duo traded each of the first three holes, with Forsman taking the 1-up advantage. Han came back with a birdie on the par-5 fourth before a bogey also earned him a win on the par-3 fifth, leading Han to his first lead of the day. The pair alternated wins again on Nos. 7-9, turning to the inward nine all square. Forsman notched a birdie-two on the 12th to reclaim a 1-up advantage, but Han once again pieced together back-to-back wins on Nos. 15-16—both being with pars. He held steady on the final two holes, as two more pars earned him the 1-up victory.

Though his afternoon match was a rematch of last year’s final with Andre Chi of Huntington, N.Y., Han found his stroke on the smooth Bedford greens, playing 12 holes in 7-under par en route to a 7&6 victory. He birdied the first two holes for wins and added a stretch of four straight birdies on Nos. 7-10, winning all but one during that span. His final birdie of the day came on the par-3 12th, another halve that clinched the win.

Bush notched two impressive wins on the day, winning 5&4 over 12-year-old Jack Merrill of Old Greenwich, Conn., in the morning and 7&6 over Randall Lazzaro, Jr., of Colts Neck, N.J., after lunch. His afternoon match was all square through the first two holes, but he played Nos. 3-9 in 2-under-par to take a commanding 6-up lead. The pair halved the first two on the inward nine, before Bush’s par-3 on the 12th closed up the match and earned him a meeting with Han in Friday’s lead semifinal contest.

Li also conserved his energy in the heat as he finished up both of his matches well before the 18th hole. Li defeated Matt Minerva of Elmsford, N.Y., by a 5&3 margin, then eliminated James Carrier of White Plains, N.Y., 6&5 in the afternoon. Wins on Nos. 2-4 quickly turned a 1-hole deficit into a 2-hole advantage in the post-lunch. While Carrier bounced back with a birdie-two on the fifth, Li won five of the next seven holes. The pair halved the par-5 13th, which closed out the match.

Sul locked up the final spot in the semifinals, winning his morning match over Christopher Chan of New York City, 4&3, and then defeating Chris Lee of West Nyack, N.Y., 2&1. Sul’s match with Lee was the closest contest of the quarterfinals. While Sul never trailed, Lee bounced back time and time again to keep it interesting. Chan claimed the first two holes, earning the second with a birdie-three, while Lee claimed the next two. Sul won three of the next four, while a bogey did earn Lee a victory as well and the Sul took a 2-up advantage into the inward nine. Lee’s deficit was cut to one with a par on the downhill par-3 10th, while the pair halved the following three holes. After trading wins on Nos. 14 and 15 and halving the 16h, Sul won the 17th hole with par to clinch the match, 2&1.

Bedford has served as one of three rotating host clubs for the Boys Championship since 1987, alongside Gardiner’s Bay on Long Island and Rumson in New Jersey. It serves as a stern test for the youthful talent, with its holes providing a variety of length and challenge. It is playing to 6,557 yards for the competitors.

Qualifying for boys not yet 16 years old took place throughout July to determine the top 16 players who will compete in match play at the event.

The semifinals and final match are scheduled for Friday. Han and Bush begin play at 8:00 a.m., while Li and Sul follow at 8:10 a.m. Each match will feature live scoring.