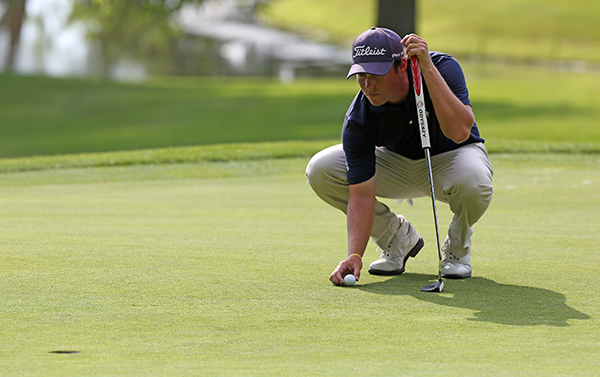 Two-time MGA Player of the Year Michael Miller of Brewster, N.Y., is on his way to Oakmont Country Club, having earned his spot in 116th U.S. Open Championship through sectional qualifying at Canoe Brook Country Club. After spending 2015 on the Mackenzie Tour (PGA TOUR Canada), the past Met Junior and Met Amateur champion has competed in PGA Tour Latinoamerica and Web.com Tour events this season and is now set for his first start in a major championship. Miller will tee off at 8:46 a.m. in Thursday's first round of the U.S. Open and will play with Matthew Borchert and amateur Charlie Danielson.

Prior to Miller's departure for Oakmont, we had a chance for a quick Q&A with the Met Area product. Look forward to more from Miller throughout U.S. Open week as he shares insight on his major experience.

How did your latest competition on professional tours prepare you to take that next step at a Sectional Qualifying Round, and advance to the U.S. Open?

Finishing 8th a week before sectional qualifying on the PGA Latino American Tour gave me the reassurance that my game was in a really good spot. Any time you play well, no matter where you are, it will give you inner confidence that you sometime need to get over the hump.

You were unsure of your position when you first finished, but found out shortly after that you had qualified. What were some of the first thoughts you had after realizing you had advanced?

My first thought after missing the putt on the last hole was trying my very best to forget about what I just did. I went from having the lead to possible playing off. Then, when I was told I qualified, my emotions got the better of me. All the hard work I have been putting in is paying off. I'm seeing the results happen more and more. I’m becoming the golfer that I want to be and playing the way I know I can.

What did it mean for you to qualify for the U.S. Open out of a Sectional in the Met Area, with the support of family and friends that were in attendance?

I really wanted to qualify just like everyone else there, but with it being in the MGA Area it couldn't have been more special. Growing up, the MGA has been everything to me. The MGA headquarters being right down the street from where I grew up playing every day at Knollwood CC. I feel like I was supposed to qualify through the MGA. Playing in the events like the Ike, the Met Am, being player of the year, representing MGA in the Carey Cup Matches and French American Team, I feel the MGA has helped me grow as a person and certainly as a golfer. That makes my first U.S. Open that much better because I qualified for it so close to home.  I was able to have my family and my girlfriend’s family out there because it was close enough of a drive. I qualified, but so did everyone else that has helped me get to where I am today. I have the MGA, friends, girlfriend Casey, and my family to thank for that.

What are you looking forward to the most about competing at Oakmont?

I am looking forward to finally getting there and teeing it up knowing no one gave me this opportunity—I earned my place here. I have been given some great opportunities as a young pro, but this one I earned.

Oakmont is often referred to as the most difficult U.S. Open venue. How do you plan on embracing that challenge?

I plan to keep the same mindset I’ve had for about the last year—since earning my Canadian Tour card—which is that I can’t control any other outcome besides my own. I am going to hit good shots that are rewarded and good shots that are not rewarded. As long as I keep everything simple and not get ahead of myself, I really do feel I have a good shot to do well. The best golfer next week will come away from Oakmont knowing they won with the correct mindset.

What areas of your game are you focusing on the most in preparation for play at Oakmont?

The area of my game which always needs to be worked on is my putting. It is no longer a weakness of mine, but always can improve. Feeling comfortable on the greens will be the biggest key to my success this week and that will be my main focus before I tee off on Thursday.