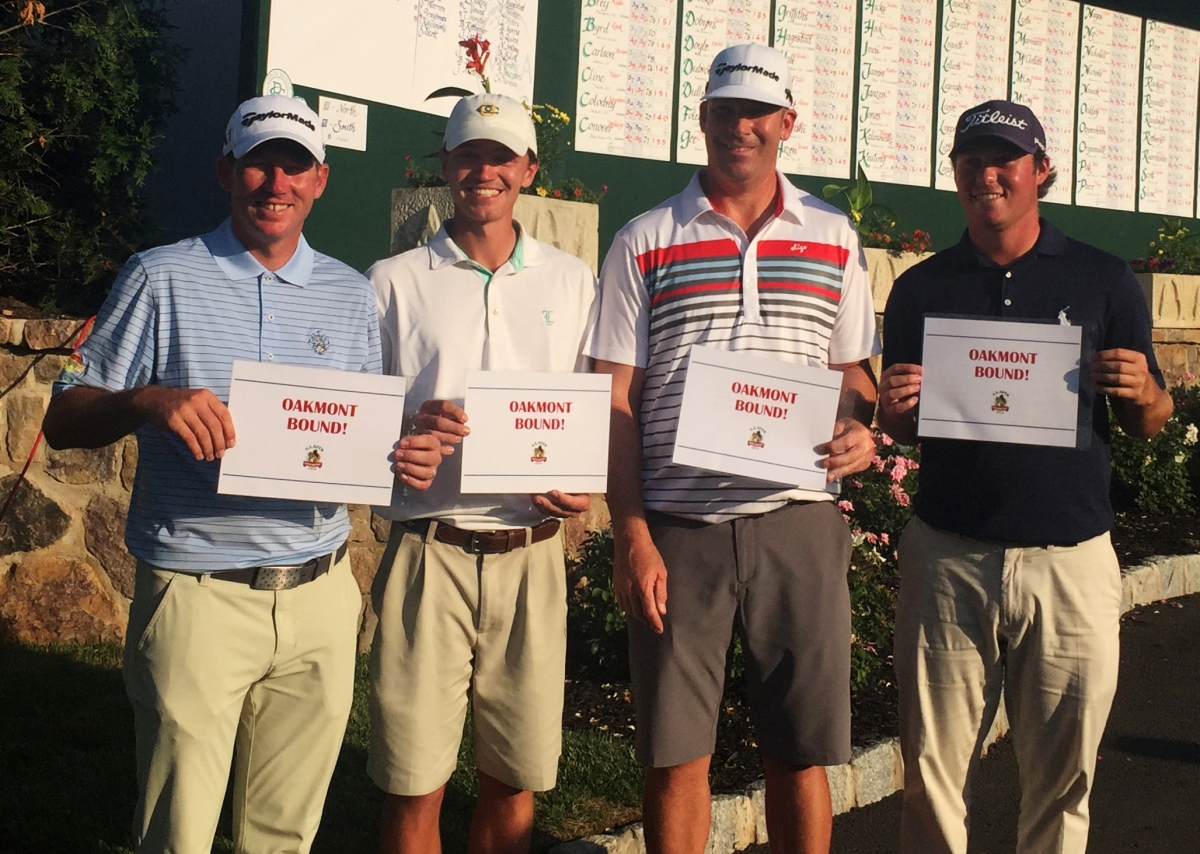 PGA TOUR players Jim Herman of Palm City, Fla., and Rob Oppenheim of Orlando, Fla., shared medalist honors at the Sectional Qualifying Round with matching 7-under 137s. Andy Pope of Orlando, Fla., Justin Hicks of Wellington, Fla., and Michael Miller of Brewster, N.Y. matched Crawford at 6-under 138, earning their way to Oakmont as well.

“That was pretty special,” said Crawford following the commotion spurred by his clinching putt. “It’s a moment I’ll remember forever.”

The 22-year old Crawford, who sported an Oakmont hat he purchased when playing in the Pennsylvania Amateur, began his day on the South Course, firing a 7-under 65 to match the morning’s low round. After making the turn in 1-under, Crawford lit up his final nine—the South’s first nine—by making six birdies over his final eight holes. The former Drexel golfer birdied the 11th and 12th during his afternoon round, but consecutive bogies on 16 and 17 opened the door for those already in the clubhouse at 5-under. But, Crawford shut the door—though unconventionally—on the 36th hole. After hooking his drive some “40-50 yards off-line,” to the 13th hole, Crawford played his second up the fairway parallel to the 18th, then hit a 6-iron over trees that he was just hoping to get on the green. He caught the right corner facing a back-left hole location and, after taking a good look, made the lengthy putt square in the back of the cup.

“Oakmont is one of the most special places I’ve ever been in my life—it doesn’t matter if it’s just golf or anything,” Crawford remarked, looking forward to his first U.S. Open experience. “I’m not sure if you could pick a better place to play in an open than at Oakmont.”

Two-time MGA Player of the Year Miller emerged as one of two qualifiers with local ties, earning a trip to his first ever U.S. Open. “It’s just a dream come true to actually get to play,” Miller said, reminiscing upon the first time he attempted to qualify for the U.S. Open some nine years ago. Miller got off to a good start beginning on the North Course, carding a 4-under 68.

“I had a great attitude this morning,” Miller said. “I knew it was going to play tough and I just wanted to find fairways and make a few putts. I ended up playing a pretty flawless round of golf with one hiccup—five birdies and a bogey.” Miller carried momentum into the afternoon, birdieing the first three holes on the South Course to begin his final 18. After a double-bogey and two more bogies, Miller felt he needed a couple more shots coming in. He reeled off four birdies in a five hole stretch, reaching 8-under at one point. Miller bogied the final two coming in, but the 138 did the job.

“It couldn’t have been a better one to qualify for,” said Miller, who is looking forward to the challenge of Oakmont.

Herman, who broke through on the PGA TOUR this season with a win at the Shell Houston Open, stood among the leaders following the morning round as he fired the day’s low round on the North Course. The former Trump National – Bedminster assistant pro has fond memories at Canoe Brook, qualifying to a pair of U.S. Opens from the club plus coming in third in the 2006 Met Open.

“I drove the ball really well this morning,” Herman said. “I got off to a good start, birdied the first hole so that’s always a good feeling there. I put myself in position—I hit a lot of greens and gave myself a lot of birdie looks.” Herman made six birdies to just one bogey in the morning. After a rough start in the afternoon—double-bogey, bogey—Herman settled in with two birdies and eagled the par-5 first hole as he made the turn to his final nine. He added one more birdie the rest of the way to co-medal.

“It feels great,” Herman said. “Anytime you qualify for the national open, you have to have a smile on your face. I’m really looking forward to getting out to Oakmont.”

Meanwhile, Oppenheim—who is playing his rookie season on the PGA TOUR after several years on the Web.com Tour—started with a 5-under 67 on the South Course. His round was fueled by four consecutive birdies on hole Nos. 6-9, plus an eagle on the par-5 15th.

“I played steady,” said Oppenheim, who practiced at Sleepy Hollow over the weekend in preparation. “I drove it pretty well and made putts when I had to. I was happy with the consistency of it. I hit a lot of fairways and a lot of greens.”

Following lunch, Oppenheim tallied three birdies to one bogey on the North Course, cruising to the 137 total and co-medalist honors.

Web.com Tour player Andy Pope carded an even-par 72 on the North Course and stood tied for 29th entering the second round. Pope turned to the front side of the South in 2-under, but took advantage on two of his three remaining par-5s by converting a pair of eagles to jump up the leaderboard and secure a qualifying position.

PGA TOUR player Hicks stood tied atop the leaderboard following his morning 7-under 65 on the South Course. Hicks, who will be competing in his sixth U.S. Open, made five birdies and an eagle during his bogey-free round. While he posted five bogies on the South Course, Hicks tallied four birdies to help secure the advancing position.

Kevin Foley of Jupiter, Fla., and Pat Wilson of Andover, N.J., emerged as the first and second alternates out of a four-for-two playoff for the positions, defeating Michael McCoy of Des Moines, Iowa, and Andrew Turner of Elverson, Pa. Turner and McCoy were eliminated on the first two playoff holes (which began on No. 10 of the North Course), while Foley carded a birdie on the par-5 12th to Wilson’s par. Wilson, the 2013 Met Amateur champion, competed in the U.S. Open at Chambers Bay last year after qualifying in Purchase, N.Y.

The MGA’s annually conducted Sectional Qualifying Round returned to Canoe Brook for the first time since 2012, as the club begins another three-year stretch as host of the final step in advancing to our national open. The North and South courses both played at a par 72, at 7,115 and 6,753 yards, respectively.