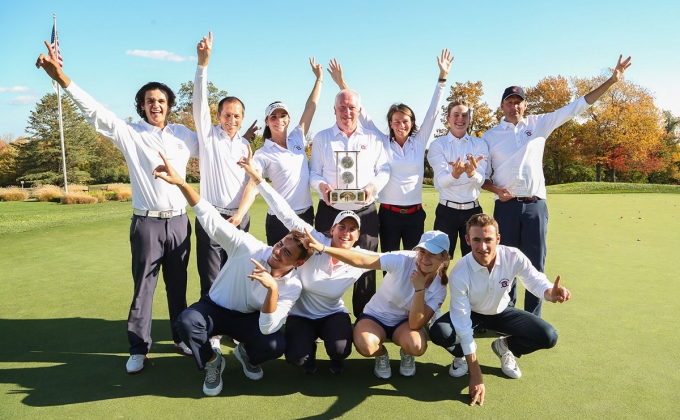 GREENWICH, Conn. (October 19, 2016) – While the MGA/WMGA won Wednesday’s singles session, 6-4, the Ligue de Paris withstood the fierce charge and claimed victory in the French-American Challenge Matches by a 10.5 to 9.5 margin at The Stanwich Club.

The outcome looked bleak in the early going as Ligue de Paris jumped out to early leads in six matches, but the MGA/WMGA competitors continued to battle and mounted several comebacks. The first two points of the day went in favor of the visitors, as Anyssia Herbaut defeated Kyra Cox of Centennial, 6-and-5, and Perrine Gouin-Petit held off Ina Kim of Deepdale, 2-and-1, bringing the score to 8.5 to 3.5. However, 16-year old Kelly Sim of Alpine began the swing in momentum, making three birdies and an eagle on the back nine. The biggest birdie came on the par-4 18th, where her three won the hole and the match, 1-up, to give the MGA/WMGA its first tally of the day.

The rally continued with Tara Fleming of New Jersey National as she faced Morgane Bazin de Jessey, a constant on the Ligue squad since 2004. Fleming birdied the challenging par-4 15th to square her match, before taking a 1-up lead with a par-3 on the 16th. While Bazin de Jessey held the upper hand down the stretch in Tuesday’s foursome and four-ball matches against Fleming, Fleming earned halves on the final two holes to win her match 1-up and pull the MGA/WMGA within 8.5 to 5.5.

Meanwhile, Brian Komline of Black Oak led off the men’s lineup with his steady play earning a 5-and-3 win over Benjamin Morin. Paul Pastore of Griff Harris kept momentum rolling and placed the fourth straight point on the board for the MGA/WMGA, winning his match over Aymeric Laussot by a 4-and-3 margin and pulling the home team within just one, 8.5 to 7.5.

Four matches remained on the course as the MGA/WMGA faced a tough battle trailing in three matches. Trevor Randolph of Arcola charged back in his match against Pierre Mazier, winning Nos. 14-15 and 17 to pull all-square. The 18th was then halved with birdies, Randolph making a 10-footer while Mazier knocked his approach to just two feet. The halve in the match earned both teams a half point, making it 9 to 8. Though momentum had built in the MGA/WMGA’s favor, the three-point deficit entering the day proved too much to overcome as Adrien Pendaries sealed Ligue de Paris’ retention of Fred’s Cup by holding off Darin Goldstein of Noyac, 2-and-1.

Amidst the other comebacks, Ethan Ng of Fiddler’s Elbow worked on authoring his own piece of the story, also making furious run despite having to putt with his hybrid and wedge after damaging his putter on the fifth hole. The 16-year old faced a four-hole deficit through the fifth, but a par-birdie sequence on Nos. 9 and 10 cut the margin in half. After halves on Nos. 11 and 12—including a birdie on 11—Ng continued to rally with wins on the next four holes. He added a birdie on No. 14 and another with a chip-in on No. 16 to take a two-hole lead. He and Christophe Ravetto halved the par-5 17th, earning Ng the 2-and-1 win in remarkable fashion.

Finally, Stewart Hagestad of Deepdale aimed to claim his match to finish the contest in a 10-10 tie. He birdied the par-3 16th to take a 1-up advantage and carried the lead to the last. Hagestad received a tough break on his drive, however, as he was forced to pitch sideways into the fairway after his ball came to rest against a tree. His approach then came up short and after two putts and Ligue de Paris’ Gary Boitour needing just two putts to win, Hagestad conceded and the match was halved for the 10.5 to 9.5 total.

The Ligue de Paris’ victory is their sixth-straight, improving their record to 15-1-2 all time. The one-point margin was the closest final score of the matches since the last tie in 2004.

The Stanwich Club was a tremendous venue and host for the 18th French-American Challenge Matches, as they continued their rich history of hosting MGA events. The Club is one of 16 clubs that have welcomed all three MGA Majors (the Ike, Met Amateur, and Met Open). The variance in holes’ length and options for play provided a quality test and style for match play competition.