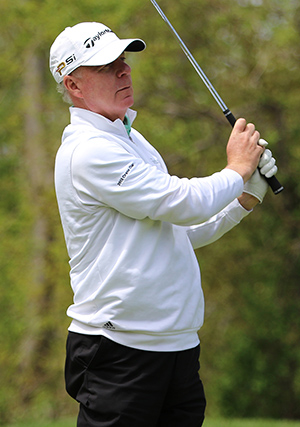 Deepdale staked claim to the top of the leaderboard following the opening round of the 89th MGA Senior Amateur Championship at Huntington Country Club. The reigning Senior Amateur champion carded a 3-under 67 for the day’s only sub-par round and will take a three-shot lead into Wednesday’s final round of play, where he will look to become the first back-to-back winner in the event since J. Wolcott Brown (1967-1969).

Dennis Lynch of Nassau Players and Don Enga of Cherry Valley sit tied for second following rounds of even-par 70. Zahringer opened a five-shot lead through the morning wave of play, but both Lynch and Enga withstood cool, windy conditions in the afternoon to stay within striking distance of the leader.

“I felt like I hit the ball well today,” Zahringer said after his round. “I missed some makeable birdie putts, but I did make five birdies, so I can’t complain about making five birdies.” Zahringer is in familiar position from just a season ago, when he took a four-shot lead following the opening round and eventually claimed his first Senior Amateur and record 16th MGA title by eight strokes at Westchester Country Club.

“I made two bogeys early on in my round, but I kind of settled down a bit and I played the last 14 holes in 3-under, so I was very happy with that.” Zahringer’s round began with a bogey on the 10th hole, before he reeled off a pair of birdies. He added another bogey on the par-4 13th, but that would be his last of the day. He reeled off five-straight pars before beginning his final nine—the front—with two straight birdies. After tacking on one more birdie on the par-4 5th, Zahringer closed with four more pars for the 3-under 67.

“I didn’t drive it into any trouble, which on this course is a big plus hitting into small greens,” said Lynch follow his even-par round. “I had a lot of short irons into the green and made some putts on the front.” Lynch’s round got off to a good start with a birdie on the par-4 1st. He added birdies on Nos. 4, 7 and 8, and made the turn in two-under par. Bogeys on Nos. 10 and 13 led to the even-par round.

Enga began his round with a bogey on the 10th hole, but reeled off eight pars to turn in 1-over. He carded birdies on Nos. 4, 6 and 7, and had one bogey en route to his round of 70.

James Graham of Winged Foot and Jon Doppelt of Fresh Meadow both carded rounds of 2-over 72 during the morning, while two-time Senior Amateur champion Ron Vannelli of Forsgate posted 72 in the afternoon.

Five players came in at 3-over 73, including Jay Sessa of Gardiner’s Bay, Anthony Fioretti of Ballyowen, Jim Romaniello of Shorehaven, Rick Lawrence of Ridgewood, and 2014 Senior Open champion Adam Kugler of Alpine.

Four competitors posted 4-over 74, while 11 competitors, including 2009 Senior Am champion Al Small of Fairmount and 1997 U.S. Mid-Am champion Ken Bakst of Friar’s Head, posted 5-over 75 to open play. 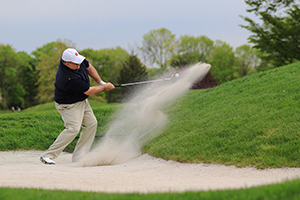 Competitors raved about Huntington’s conditions, including pure greens to accentuate their stellar design. “The green complexes at Huntington are fantastic,” stated Zahringer. “It’s an old-fashioned Devereaux Emmett design. I love the greens, there’s a tremendous variety in the greens.”

For Zahringer, the veteran is looking forward to a little more comfort on the course during Wednesday’s final round, though his score certainly didn’t show any uneasiness on Tuesday. Zahringer estimated he hadn’t played the course in some 30 years, though he did walk the course last week. “So, I think I’ll have a little more familiarity with the course tomorrow for sure, and I’d like to think that would translate to being a little more comfortable and relaxed and that will lead to some more scoring.”

Following Tuesday’s round of play, a cut was made to the low 40 scores and ties, with 47 players advancing to Wednesday’s final round. The MGA will provide live hole-by-hole scoring for the majority of groups during the final round. Play will begin at 7:30 a.m., with the final group teeing off at 8:58 a.m.

About the MGA: The Metropolitan Golf Association was founded in 1897 and is one of the nation’s oldest and largest amateur golf associations representing more than 500 clubs in the tri-state Metropolitan Area. Through a network of more than 300 volunteers, and a full-time staff operating out of its Golf Central headquarters in Elmsford, N.Y., the Association fulfills its role as a true non-profit service organization. Through a variety of unique, relevant, and innovative services for member clubs and area golfers, the MGA has established itself as a leader among local and national golf organizations.