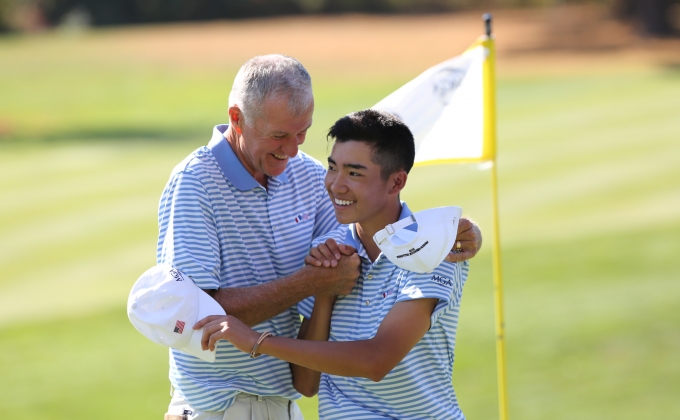 Small cheering on Ethan Ng at the 2016 French-American Challenge Matches.

ELMSFORD, N.Y. (November 4, 2021) – The Metropolitan Golf Association is pleased to announce Allan W. Small as the recipient of the MGA's highest honor, the 2021 Distinguished Service Award, in recognition of Small’s many contributions to the game.

The MGA’s Distinguished Service Award has been presented since 1973 to a candidate who has contributed “distinguished service to golf and its related activities, consistent with the valued standards and honorable traditions of the game.” Some of its earliest winners include Joe Dey, Harry Cooper, Robert Trent Jones, Sr., and P.J. Boatwright, while names such as Dave Anderson, Paul Dillon, David Fay, Jimmy Roberts, Suzy Whaley, Jay Mottola and Jim Nantz have received the honor in recent years.

“When you think of the criteria for the award, I can’t think of anyone that fits it better -- as a great player and a volunteer leader, and as a true ambassador for the game,” said Jay Mottola, who was the MGA executive director during Small’s tenure as MGA president from 2009-2010. 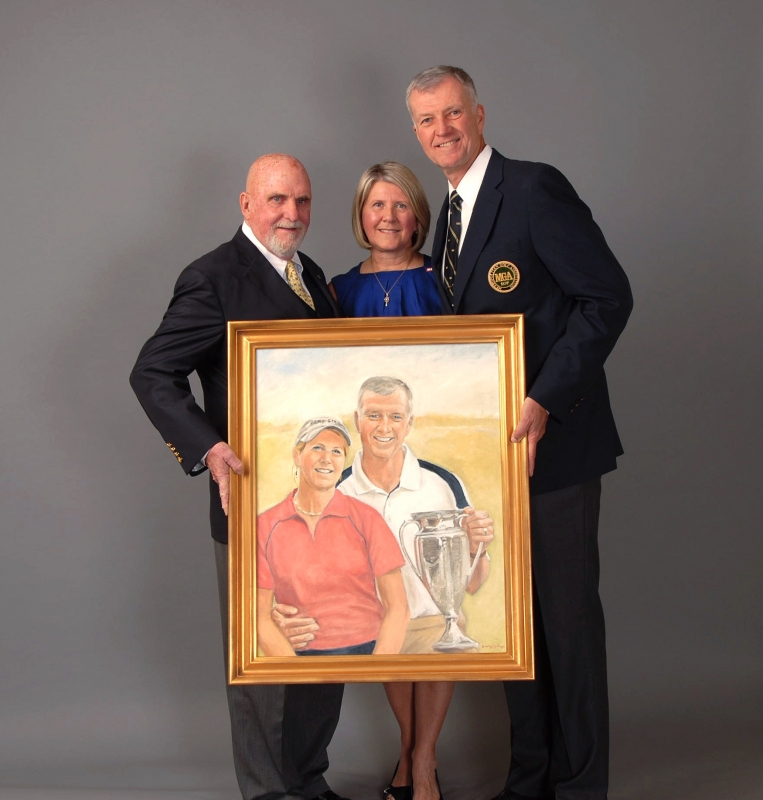 Paul Dillon presented Small with a portrait from the 2009 Senior Am, which Small captured with wife and trusted caddie Patti on the bag.

‘Big Al’ Small officially began to serve the MGA as a volunteer leader in 2002, joining the MGA Junior Committee to provide guidance and help steer the Association’s junior-related activities, including its championships. A year later, he joined the Executive Committee and then took on a leadership role in 2005 as the Secretary/Treasurer. In addition to a busy competitive schedule, it was rare he missed any MGA or MGA Foundation events, including educational seminars, youth clinics, junior competitions, fundraisers, and other special events.  “As he was moving through the ranks to become president,” said Mottola, “he worked hard to understand all of the MGA and MGA Foundation’s programs, to prepare himself to be president and represent the MGA. He was very passionate about everything, especially what the Foundation was doing.”

At the 2008 Annual Meeting, Small was elected to his first one-year term as President of the Association for 2009. While president, Small oversaw initiatives like the launch of a new website, a public golf membership campaign, was instrumental in creating a business structure for the future with the first-ever MGA executive committee retreat, and the expansion of the Golf Central headquarters where the MGA is still housed today.  “Al took the time to really listen to everyone, whether it was a tournament competitor, fellow volunteer, or staff member or intern, and truly valued what they said,” MGA Executive Director Brian Mahoney said. “In board meetings, he made sure everyone in the room had a voice, and insisted on every person in the meeting sharing their thoughts or ideas, no matter how big or small, including the staff members present.”

Small was instrumental in the expansion of the MGA Foundation’s GOLFWORKS intern program and other youth initiatives focused on making the game more accessible. He helped to grow the Foundation’s donor base, and was very hands-on; he could be found meeting with a GOLFWORKS intern, participating at a youth clinic, officiating a junior competition, and introducing others to all that the Association was doing. 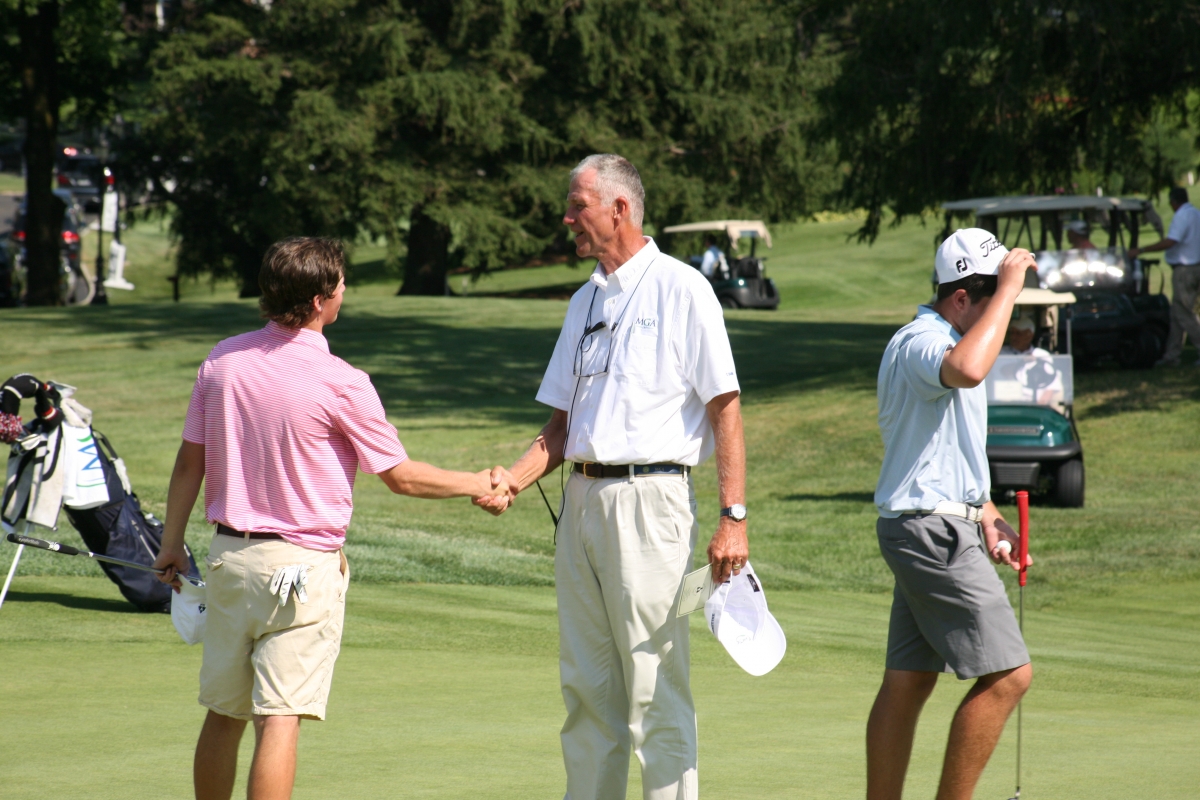 While Small has always made an impact off the course, he also holds one of the most impressive Met Area competitive playing records. He has two MGA Senior Amateur wins to his name: 2009 at Preakness Hills while he was president, and in 2017 at his home course of Fairmount. Playing out of Fairmount since becoming a member in 1981, he has top finishes in the Met Amateur and Ike, and captured a number of invitational events throughout the Met Area. He played on multiple MGA International teams, was on the Player of the Year Honor Roll seven times from 1989-2006, and has qualified for 23 USGA events ranging from the U.S. Amateur to the U.S. Senior Open. He was the first – and remains the only – player in New Jersey State Golf Association history to win the NJSGA Amateur, Mid-Amateur, and Senior Amateur; the 2004 New Jersey Player of the Year is a member of the 2020 NJSGA Hall of Fame class.

In addition to his running his own electrical contracting business, S&R Electric, raising a family, and competing, Small found time to serve as the head coach for the Seton Hall University men’s golf team from 1990 to 1996. The Pirates won their first Big East Men’s Golf Championship in 1992 under Small’s leadership. Small returned as an assistant coach from 2011 to 2014.

Whether on or off the golf course, Small has always been one of the biggest advocates for the MGA and MGA Foundation. “It can’t be said enough how wonderful a representative of the Association Al is,” says current president Andy Stock. “It’s clear to see his passion for giving back and helping to grow the game in every aspect.”

"What a pleasure it has been to work with Al for the betterment of the MGA and the game we love,” said Tod Pike, chair of the DSA Committee. “He's so positive, so hard-working and has always been devoted to the MGA and its mission. You can always count on Al's smile and can-do attitude."

The MGA is proud to honor Al Small as a most-deserving Distinguished Service Award recipient. The award will be presented at the MGA’s 124th Annual Meeting and Dinner on December 1.

Be sure to read more on Al Small and his contributions to the game in the upcoming November/December issue of The Met Golfer.