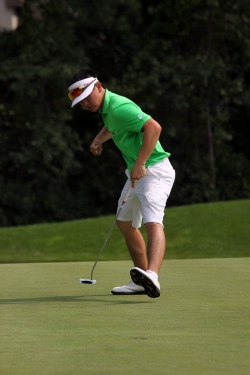 Headlining the first semifinal is defending Met Amateur champion Mike Miller of Knollwood Ryan McCormick of Suburban, Miller, who’s ranked No. 52 in the current World Amateur Golf Rankings, defeated Doug Kleeschulte of Wiltwyck 3 & 2 in the Round of 16, then took out red hot stroke-play medalist Brian Komline Black Oak, 4 & 2 in the quarterfinals. The 20-year-old never trailed a single hole during his two match play rounds on Friday.

"I feel great, I’m really looking forward going into tomorrow,” Miller said. “I already played with Ryan in the stroke play and he’s playing phenomenal. We both played great in the morning wave (both shot 6-under 65s) and really fed off each other. It’s really nice to get back, being the defending champ, and possibly get to the finals again.”

McCormick, the 2012 NJSGA Amateur and NYC Amateur champion, had somewhat of a roller coaster day. It started with a comeback in the Round of 16, when his St. John's University teammate Pat Wilson of Panther Valley had him three down with six holes to play. But McCormick, 20,  mounted a rally and won five consecutive holes to win 2 & 1. He then beat Greg Etimos of Island Hills in the quarterfinals, 5 & 4, which included a hole-out eagle two on the par-four fifth hole from 160 yards out. And it was only a few months ago that McCormick defeated his buddy Miller in a playoff to decide the 2012 NYC Amateur.

“I played great this afternoon,” McCormick said. “I kinda got off to a slow start. You know after four, I said to my caddy “come on let’s go, let’s play aggressive golf.” And I got it going after that.”

The second semifinal match features two players who are simply rolling. The first is Harrison Shih of Alpine, who has been playing lights out over the last two days. The 18-year-old beat popular MGA competitors Ken Bakst of Friar’s Head 3 & 2 in the Round of 16 and then Max Buckley of Westchester 3 & 2 in the quarterfinals. Shih, who will attend Columbia University in the fall, credited his play to the lack of expectations he had heading into the week.

“I think it’s just about playing steady golf. Today and yesterday were both long days, you gotta be patient with your rounds and not be too aggressive,” Shih said. “This is my first amateur tournament, so I didn’t really have expectations, other than just play well. I’ve made it two days so far and I’m extremely pleased.” 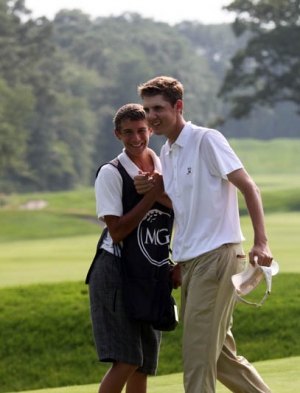 His competitor is Matt Mattare of Bethpage, who you probably remember from Friday after his Met Amateur stroke-play record tying round of 64. Mattare had a marathon day at Hollywood. It took him 23 holes to beat David Weisfield of Fenway in the Round of 16, and then had to quickly turnaround to take on 15-year-old phenom Cameron Young, who be defeated 2 & 1 in the quarterfinals. But the 26-year-old has been collecting a lot of strong finishes recently, including a T9 finish last week at the Golf Association of Philly Open Championship at Pine Valley.

“ I’m exciting, when I moved here I didn’t know how high a level I would be able to compete at, living in the city and going to Chelsea Piers a couple times a week to hit balls,” said Mattare, who recently moved to Manhattan to work for Morgan Stanley. “It’s a surprise on some levels. I know I’m capable, but under the circumstances, I’m really, really happy.”

The two semifinal matches will take place on Saturday, with the first match beginning at noon. Live hole-by-hole scoring will be available, as well as photos and video, through mgagolf.org.

DEAL, N.J. (AUGUST 3, 2012) - Following a day filled with some of the highest level of play ever seen in the 36-hole stroke play portion of the Met Amateur Championship, players took to the course for the Round of 16 at Hollywood Golf Club on Friday morning. Below is a recap of each match: 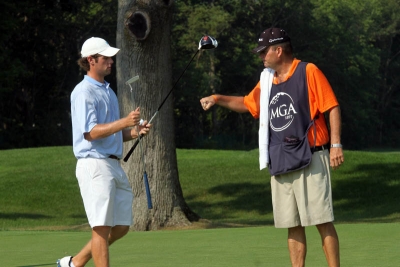 Match 1:
It took 19 holes for stroke-play medalist Brian Komline of Black Oak to defeat Niall Handley of Essex Fells in the day's first match. It was up and down all morning, and got squared up when Handley drilled a clutch 15-foot putt on the 18th to go into extra holes.

Match 2:
Defending champ Mike Miller of Knollwood never trailed in his match with Doug Kleeschulte of Wiltwyck, and won 3 & 2 to move on to the quarterfinals.

Match 3:
In one of the biggest turnarounds of the Round of 16, Ryan McCormick of Suburban beat his St. John's University teammate Pat Wilson of Panther Valley 2 & 1. McCormick trailed 3 down through 12 holes, then went on to win the next five holes in a row.

Match 5:
It took 23 holes for Matt Mattare of Bethpage to beat David Weisfield of Fenway. Mattare was 4-down through 5 holes, but came roaring back and got it done by dropping a 15-foot birdie putt to end the marathon match.

Match 7:
Down for most of his match on Friday morning, Max Buckley of Westchester was able to fight back and take a 1-up lead on 2011 Met Amateur runner-up Sam Bernstein of Century after winning the 12th and 13th holes. He went on to win 2 & 1.

Match 8:
In the match with the biggest age difference between competitors, 18-year-old Harrison Shih of Alpine took a 1-up lead over 54-year-old Ken Bakst of Friar's Head on the third hole and never looked back. He was a 3 & 2 winner.