DEAL, N.J. (August 2, 2012)– Hollywood Golf Club brought out all the amateur stars and even created some new ones during 36-hole stroke play qualifying at the 110th Met Amateur Championship on Thursday. Familiar Met Area competitor Brian Komline of Black Oak took home medalist honors after putting on a brilliant performance, following an opening round 5-under 66 with a 68 for an 8-under-par 134 total. He’ll be the top seed heading into the 16-man match play portion of the Met Amateur, beginning Friday morning at 7:30 a.m. 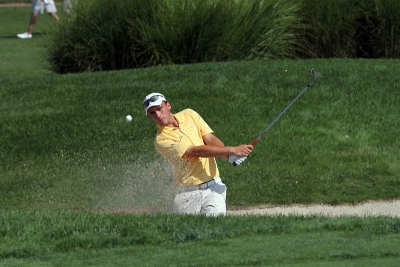 Komline, who won the 2010 MGA MetLife Public Links Championship and the NJSGA Mid-Amateur earlier this summer, said he’s played several tournaments at Hollywood and his familiarity was helpful, especially on the difficult, undulating greens.

“I’m very familiar with this course, we’ve had a couple State Amateurs, State Opens here, so I didn’t even play a practice round,” the 38-year-old said. “I’ve played it enough that maybe it’s my time. These greens are treacherous, you have to get it close and I hit my irons close today.”

Twenty-six-year-old Matt Mattare of Bethpage decided his 1-over 72 in the first round wasn’t good enough to qualify, so went wild in his second round, firing a tournament-low and Met Amateur-tying record 64 to place second behind Komline at 136.

“I wish I hadn’t lipped out that 5-footer for birdie on 17,” Mattare joked when told of tying the scoring record. “This is one of the premier amateur events in the country, so it’s good to make any sort of history. The course is in such great shape, and the greens are perfect. If you hit your spots they’re dropping.”

Ideal playing and weather conditions greeted the starting field of 65 at historic Hollywood. The 2012 NJSGA Amateur and NYC Amateur champion Ryan McCormick of Suburban, who shared the 18-hole lead with Mike Miller of Knollwood after morning-low 65s, finished tied for third (137) along with Greg Etimos of Island Hills, Harrison Shih of Alpine, and Max Buckley of Westchester, who followed up a 1-under 70 with a 67. Buckley is having a strong summer thus far, finishing second at the Ike in June and recently advancing to the match play portion of the prestigious North & South Amateur at Pinehurst.

“I’ve been working on few things with my swing coach and it was working out there today,” Buckley said. “Tomorrow I won’t try to change anything. I love match play, one bad hole doesn’t take you out, and that’s the beauty of it.”

ifteen-year-old Cameron Young will go for his fourth win of the season and biggest of his young career after firing rounds of 68-71 to finish alone in seventh. Doug Kleeschulte (70-70) of Wiltwyck finished in eighth with a total of 140, while 2011 MGA/MetLife Public Links champion Anthony Aloi of MGA eClub - New Jersey, Ken Bakst of Friar’s Head, and Miller tied for ninth at 141.

Five players rounded out the 16-man match play bracket with two-round totals of even-par 142, including 2011 Met Amateur runner-up Sam Bernstein of Century, 2011 MGA Mid-Amateur champion Niall Handley of Essex Fells, David Weisfield of Fenway, and St. John’s University teammates Pat Wilson of Panther Valley and Dylan Crowley of Glen Cove. Wilson has been a top-10 machine this summer, tallying seven so far, and will fly out with Crowley to Colorado in two weeks to compete in the U.S. Amateur.