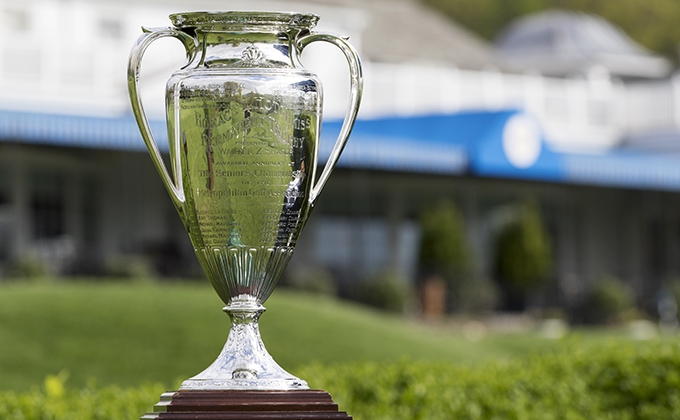 WEST ORANGE, N.J. (May 6, 2019) – Seven birdies led Ken Bakst of Friar’s Head to a 4-under 66, Monday, at Montclair Golf Club as the 2019 MGA championship season teed off with the 92nd MGA Senior Amateur Championship. Bakst fired one of just two sub-par rounds on the day, the other coming from Jim Graham of Winged Foot with a 1-under 69.

With play taking place on Montclair’s Second and Third nines, Bakst began his round with a bogey on the par-4 10th, but quickly bounced back with a trio over birdies over the next four holes. Upon making the turn, he added three more on Nos. 1, 2 and 5 before a closing bogey led to his 66 total.

“I drove it well, I hit some good irons and I hit a lot of good putts today,” said Bakst, the 1997 U.S. Mid-Am champion. “I’d love to add an MGA championship,” said Bakst, who already has the 1996 Met Amateur title to his name as well. “That’s what we all play for.”

Looking forward to the final round, Bakst has his sights on the prize. “I always have high expectations,” he said. “It’s a little early in the season for me. I don’t play a lot of golf in the winter like some of the guys that go down to Florida, but golf’s a funny game—you come out and do your thing, one shot at a time, and hopefully I can do that again tomorrow.”

Graham’s round was also highlighted by a hot stretch early in his inward nine, as he posted birdies on Nos. 10, 13 and 15.

“I’ve always considered myself kind of a good field filler in the Met,” said Graham. “I haven’t won too many things over the years, but I’m playing good. I like the golf course, so hopefully I can come back and do it all over again tomorrow and see what happens.”

Eight players sit within six shots of Bakst’s pace, with Dave Scialabba of Meadow Brook and Peter Van Ingen of Deepdale posting matching 1-over 71s as part of the morning wave. Meanwhile, a host of players came in at 2-over 72, including reigning champion Adam Kugler of Alpine, two-time champion Jay Blumenfeld of Mountain Ridge, and 2018 U.S. Senior Amateur quarterfinalist Ned Zachar of GlenArbor. Also firing 2-over were Jim Craffey of Arcola, Anthony Fioretti of Ballyowen, and Roger Hoit of Baltusrol.