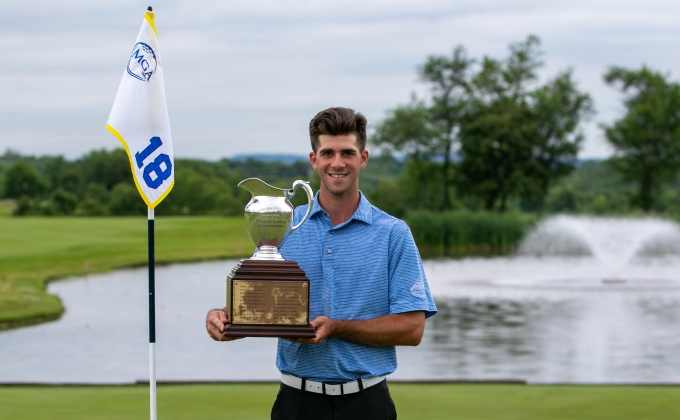 NESHANIC STATION, N.J. (June 13, 2019) -- After carding a 1-over 37 on his opening nine of the 72nd MGA Public Links Championship, Gray Barnes of Centennial blistered his inward nine for a stellar 5-under 31 en route to posting 4-under 68 and capturing the title at Neshanic Valley Golf Course by one shot.

The day got off to a slow start as more than an inch of rain fell through the morning, leading to a three-hour delay in starting times and causing the nation's oldest public links championship to be trimmed to an 18-hole event.

Barnes began his round on Neshanic Valley's Meadow nine, which served as the back nine for the championship, and played his first six holes in three-over par. "I got off to an awful start," said Barnes. "The wind was howling when we first teed off and kind of calmed down as the day went on. I felt like I was swinging well the whole day, just the putts weren't dropping and the shots were just missing. I've been in that situation before and I just kind of stuck to my game plan."

However, momentum began to shift as the recent University of Tampa graduate birdied Nos. 16 and 18 to make the turn in 1-over 37. "The putts started dropping and I started hitting a few close," Barnes said.

The birdies provided just the spark Barnes needed, as he carried momentum into a spectacular finish on the Lakes nine. Barnes tallied five birdies and no bogeys on the way in, dropping a pair of 30-footers in addition to knocking approaches tight for more routine birdie conversions. For Barnes, the situation seemed familiar. His playing competitor David Powers of Swan Lake had a strong round going and Barnes expected Powers to be in the running for the title. Each of the last three years, Barnes has played alongside the eventual champion.

"Being in the same group as the guys who win, you see what it takes to win and you learn from it," said Barnes, thinking back on his past experience. "I've been in contention, I've held the lead. I just knew that I needed a couple putts to drop and they did."

Barnes had a strong 2018 season in which he qualified for the U.S. Amateur at Pebble Beach, and though so far this year he's been working more, his game has stood up despite less practice time. "This game is crazy the way it works--you practice less and play better," said Barnes, who is now exempt into both the Ike and Met Amateur. "It doesn't make sense, but that's golf. I'm just glad I've won an MGA championship. I've always dreamt about that. I'm just so happy to have won."

Powers finished solo second behind his 3-under 68, while MGA eClub - New Jersey member Jonathan Ross and Nick Dilio of The Links at Union Vale carded 2-under 69s to share third. Jason Bataille of host Neshanic Valley, 2018 Public Links runner-up Rob Pepi of Nassau Players, Ryan Lee of Darlington, Shawn Blandine of Black Bear, and Met PGA Junior League member Chris Lee all posted 1-under 70s to tie for fifth and round out the top-10 finishers.

Neshanic Valley was hosting its second MGA Public Links Championship and served as a spectacular host venue. Players, many of which were seeing the course for the first time, were impressed with the layout and spectacular conditions, especially considering the morning's rainfall which cut the championship short.

The 73rd MGA Public Links Championship in 2020 will be hosted by the Pete Dye-designed Pound Ridge Golf Club in Pound Ridge, N.Y.