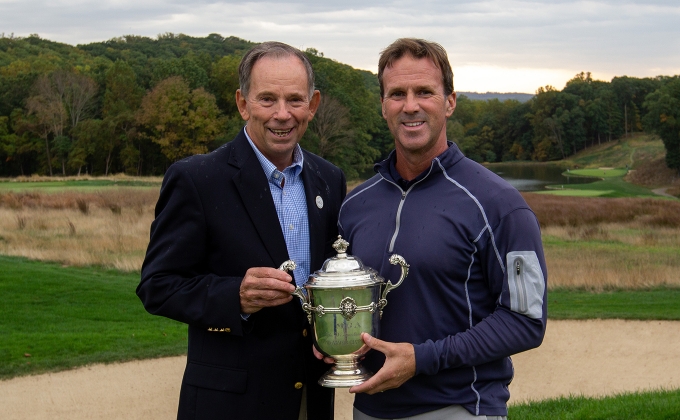 BERNARDSVILLE, N.J. (October 7, 2020) -- While players slipped back one by one coming down the stretch of the 14th MGA Mid-Amateur Championship at Somerset Hills Country Club, MGA eClub - New Jersey member Tom Timby made his move in the other direction to capture the title. Timby closed strong with back-to-back birdies on the par-4 17th and 18th holes, posting a his 1-over 72 final round for a 3-over tournament total and a two-shot victory.

"I birdied 17 and we got here on 18, [my caddie] Zack gave me the number and I said, 'We just need to go at it, we need at least one more,'" said Timby, recalling his finish and wanting to put pressure on the leaders. He knocked it to a foot to seal his 72 and capture the clubhouse lead at 3-over with the then leaders coming down the stretch.

With seven holes to play, it seemed to be a four-player race with two-time past champion Niall Handley of Essex Fells sitting at even-par and the trio of first round leader Matt Mattare of Darlington, Matt Finger of Darlington and past champion Brad Tilley of  Sleepy Hollow all one shot back.

Handley played Nos. 13-15 in 6-over, while Mattare played Nos. 13-18 in 5-over to both drop out of contention. Tilley and Finger both doubled the par-3 12th hole after finding the water behind the green, and though Tilley bounced back with a birdie on the par-4 13th, a triple-bogey on the par-4 15th quickly dropped his position on the leaderboard around the same time Timby finished. A birdie on the last would have forced a playoff for Finger, but a drive in the fescue and an aggressive birdie putt on a 30-footer led to a three-putt bogey that earned Timby the victory.

"I can only control what I can control and we had enough to handle out there," said Timby about the second straight day of challenging scoring conditions thanks to gusty winds combined with quick, undulating A.W. Tillinghast greens.

Timby also tallied birdies on Nos. 5 and 10 on the day, helping offset his five bogeys on the card. His last came on the par-3 12th, before he reeled off four consecutive pars then his closing birdies.

"I'm no-frills," said Timby describing his game. "I'm very straight off the tee. I'm not the longest guy, I'm not going to dazzle you with anything. I know my game and I don't mind wind. I'm not a bomber, I'm just kind of a plodder and this course fits me well in that regard."

After a couple of recent runner-up finishes, including the New Jersey Public Links which earned him his slot in the field, Timby was more than pleased to come away with the victory.

"It's an honor," said Timby. "To have Mr. Westmoreland's name on the trophy and have him give it to you is pretty amazing. I know how prestigious this tournament is for the MGA, so it's kind of surreal still."

Tilley and Finger finished tied for second at 5-over for the championship, posting scores of 75 and 76, respectively on Wednesday.

MGA eClub - NYC member Stephen Walsh matched Timby for the low round of the day with 72, finishing tied eighth at 7-over 149 alongside seven other players: David Weisfeld of Hudson National, Andrew Biggadike of The Ridgewood Country Club, past champion Darin Goldstein of Deepdale, Thomas Guy of Eligo Club and Colby Anderson of Nassau.

Somerset Hills fully displayed why it's a mainstay in Top-100 lists, as its classic Tillinghast layout continues to challenge today's players. Though players were sternly tested in every aspect of the game, they delivered high praise for the course and its outstanding conditions.