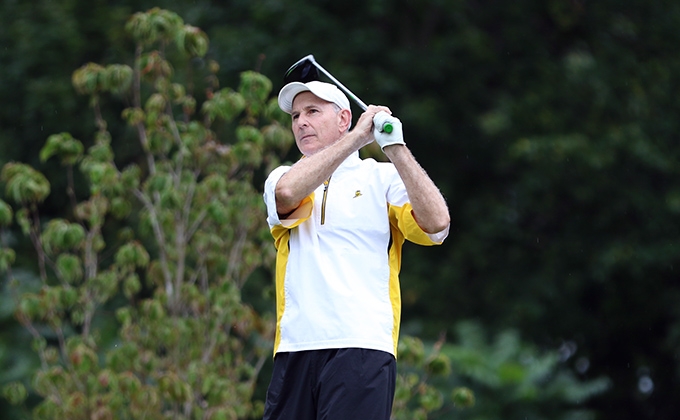 BEDFORD, N.Y. (September 19, 2017) – Jay Blumenfeld of Mountain Ridge made the most of his debut in the MGA Senior Masters Tournament on Tuesday, winning the sixth edition of the event by five shots at Bedford Golf and Tennis Club behind a 1-under 71.

John Hamilton of Hudson National tallied a 4-over 76 for second place, while Ralph Lombardi of Neshanic Valley and two-time Senior Masters champion Ron Vannelli of Forsgate tied third with 6-over 78s.

“It was mainly consistency, keeping the ball in play, and I was never really in trouble,” said Blumenfeld, who is also a two-time winner of the MGA Senior Amateur. Blumenfeld reported that he missed just a couple of fairways and greens on the day. His three bogeys were offset by four birdies—a strong performance for his first time playing Bedford and having limited practice time as of late.

“I hit the ball pretty well,” Blumenfeld said, while also referencing a conservative game plan since he hadn’t seen the course, which features a variety of elevation changes and doglegs. “The golf course was in great shape and it was fun to play,” he said. “I had an operation August 17, so I couldn’t play for a few weeks and haven’t had a chance to practice too much—but that may be a good thing.”

Blumenfeld started on the right foot, carding a birdie on the challenging, uphill par-four 7th as play began with a 1 p.m. shotgun. He registered bogeys on Nos. 10 and 14 on the back, but responded immediately in both cases, bouncing back with a birdie on the par-four 11th and placing consecutive circles on his card on Nos. 15 and 16. As he said, consistency was the key the rest of the way in, as he closed with seven more pars and just one bogey.

For Blumenfeld, the results was a pleasing outcome as he took advantage of his first chance in the event. “This is great,” he said. “Obviously it’s my first time. I turned 65 at the end of last year, so it’s my first opportunity. The funny thing about senior golf is every single year you get older there are younger guys that come in that also can compete and they’re good golfers. So, you have to get victories as soon as you can, and I’ve been lucky enough to do that.”

John Ward of The Stanwich Club finished solo fifth with a 7-over 79 but claimed first net honors with a 1-over 72. Frank Laznovsky of Meadow Brook, Robert Miller of Spook Rock, 2016 champion David Pilossoph of Bronx River, and Tom Fox of Apawamis Club rounded out the top-10 finishers, tying for sixth with scores of 8-over 80.