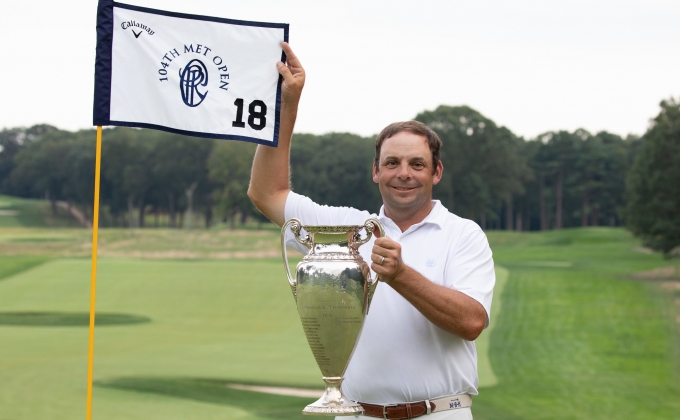 LOCUST VALLEY, N.Y. (August 22, 2019) -- A second-consecutive 5-under 66 at Piping Rock Club led Matt Dobyns of Meadow Brook to a come-from-behind victory on Thursday in the 104th Met Open Championship Presented by Callaway. Dobyns, 41, began the day four shots back of leader Ben Polland of Deepdale, but his bogey-free final round propelled him to a 13-under, 200 total and a two-shot victory over Polland and Michael Graboyes of Watchung Valley, who fired a 3-under 68 alongside Dobyns in the final round.

Dobyns, whose previous best finish in the championship was a tie for second in 2017 at Hollywood, made his move early, carding birdies on Nos. 2, 5, and 6 to jump within one of Polland. Six consecutive pars kept the Texas native near the top, while a stellar up-and-down birdie from left of the drivable par-four 13th moved him to 12-under, matching a hot Graboyes at the time. For Dobyns, holes 5 and 13 played a pivotal role in his road to hoisting the prestigious Walker L. Trammell Trophy and collecting the $27,500 winner's share.

"I thought about those holes a lot," said Dobyns, who birdied both drivable holes in every round. "I wasn't certain that I was going to go for both of those holes off the tee, because when you do, you bring some bigger numbers into play if you hit a poor shot." In the end, the risk was worth the reward for Dobyns as he played them in 6-under. "That was a big piece of my week."

The two-time PGA Professional Championship winner began checking scores with six holes to go, finding that he and Graboyes were battling atop the leaderboard as Polland, Michael Miller of Knollwood and Mike Ballo, Jr. of Winged Foot, remained stagnant in the final grouping.

The par-four 16th proved to be the difference maker, with Dobyns clubbing up on the uphill approach and knocking it within six feet. He drained the birdie look while Graboyes, who spun the ball off the false front and couldn't get up-and-down for par, made bogey. Dobyns carded consecutive pars to close and taste victory for the first time in the Met Open.

"I've had a lot of success in this tournament, but on the flip side, I've also had a lot of disappointment too," said Dobyns. "I've missed the cut multiple times," he continued, saying that after reflecting, it seemed to be about the timing of the championship and his lack of preparation. "This year, I tried to make a little bit more of a concerted effort to get ready for this event." In preparation for the event, Dobyns made the quick trip over to play several times with Piping Rock's Sean Quinlivan to gather valuable course knowledge.

Matt Dobyns made it a priority to peak at the right time for the 104th Met Open this year.

That preparation resulted in his first Met Open victory.

While Dobyns is thrilled to place his name among mentors on the historic list of Met Open champions, he's most pleased coming out on top against such a talented group of players. "I think the most rewarding part of winning this week is knowing how many good players are in the field," he said, noting the likes of reigning champion Andy Svoboda of Engineers, Polland, and Miller, who have spent the season on the Korn Ferry Tour. "As a club professional, it's extraordinarily rewarding to be able to come out here and execute for three days as good as those guys."

Graboyes, who, like Dobyns, only had four bogeys for the week, finished solo second at 11-under 202. Polland, the 2015 Met Open champion, and Ryan McCormick of Suburban finished tied for third. Andrew Gai of Long Shore, James Nicholas of Westchester Country Club and Miller all turned in 9-under championship totals to tie for fifth. For Nicholas, the finish earned him low amateur honors in the Met Open for the second time, last time sharing it with Cameron Young in 2017 at Hollywood. Svoboda, Ballo, Jr., and Paul Pastore of Fairview rounded out the top-10 finishers at 6-under.