Canoe Brook Set to Host Ike for the First Time

Canoe Brook Set to Host Ike for the First Time 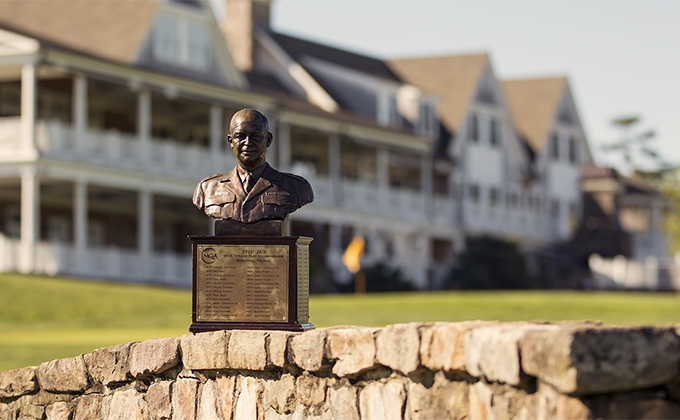 The championship, which Canoe Brook will welcome for the first time and host on its North Course, perennially features a deep field containing the region’s top amateur talent. This year’s qualifying for the 144-player field was completed through qualifying rounds at five sites throughout the Met Area.

Up For Grabs
The Ike title is up for grabs as reigning champion Michael Graboyes of Watchung Valley turned professional for last year’s Met Open. Last year’s top-10 featured two additional players that have since turned professional: Dylan Stein of Stanton Ridge and Evan Grenus of Sterling Farms.

In the Mix
Two players in the field have recorded top-10 finishes both of the last two years, with Chris Gotterup of Rumson finishing second and tied for eighth, and Sam Goldenring of Brooklake finishing tied for fifth at both Century and Meadow Brook. James Nicholas of Westchester had back-to-back top-10s in the Ike in 20016-17 (T5, T7), before finishing tied for 16th at Meadow Brook last season.

Building on 2018
In addition to Gotterup and Goldenring, Ethan Ng of Knickerbocker, Adam Xiao of Old Westbury, Joe Saladino of Huntington and Zach Grossman of South Fork return to the Ike’s field this year following top-10 finishes at Meadow Brook.

The Race Ramps Up
The Ike stands as the first significant point total event of the season in the race for the MGA Jerry Courville Sr. Player of the Year award, with the winner earning 250 points. Players making their mark early in the race include Thomas Lamorte of Knickerbocker (225 pts), Trevor Randolph of Arcola (200 pts) and Long Island Open low amateur Christopher White of Garden City Golf Club (170 pts), and recent Long Island Amateur champion Prescott Butler of Meadow Brook (155 pts)

Starting ‘19 Right
A number of players have already earned titles in 2019 and aim to carry momentum into the Ike. Early winners include Joe Saladino of Huntington at the Havemeyer Invitational, Eric LeFante of Somerset Hills at the Mittelmark Invitational and Trevor Randolph of Arcola at the Hochster Memorial.

Experience Pays Off
Not to be outdone, the field includes a number of decorated mid-am and senior competitors aiming to vie for the title, including reigning MGA Player of the Year Darin Goldstein of Deepdale, Matt Mattare of Darlington, Randolph of Arcola, Brad Tilley of Sleepy Hollow, the 2003 Ike Champion.

Hosting for the First Time
Canoe Brook is no stranger to hosting MGA championships, having crowned nine MGA champions beginning with 1923 Met Open winner Bob MacDonald. However, this will be the first time the Ike will be contested at the club, which will become the 17th club to have hosted each of the MGA’s three majors—the Ike, Amateur, and Open.