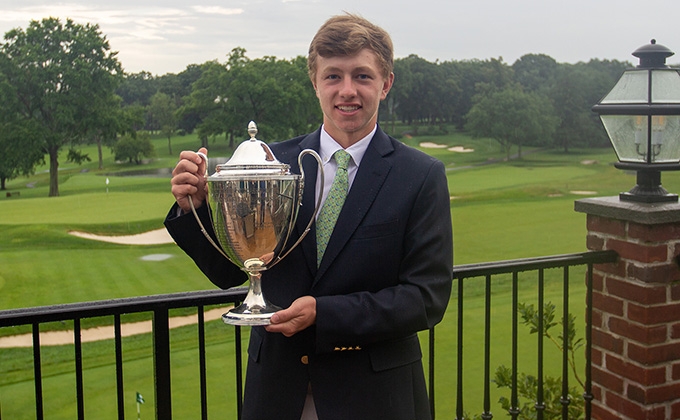 SPRINGFIELD, N.J. (July 31, 2019) -- Ben Carpenter of Darien, Conn., carded a 2-under 69 on Baltusrol Golf Club's Lower Course on Wednesday morning, leading him to take the title in the 17th Carter Cup as weather shortened the championship to an 18-hole event.

Carpenter, a rising senior at Brunswick School playing in his first and last Carter Cup due to his age, made an early bogey after starting on the 10th hole, but quickly turned things around. He immediately birdied the par-4 13th and added two more circles on his card on No. 15 and on the long par-5 17th.

"I think the main thing for me was my confidence," said Carpenter. "I kind of short-sided myself on the 12th hole and didn't get up-and-down from the bunker, but after that I just didn't change my mindset at all. I just kept saying hit fairways, hit greens, if the pin is gettable, go for it, if not just hit the middle of the green and make par. That worked."

Carpenter played steadily through the remainder of the round, posting 10 consecutive pars en route to--what he didn't know at the time--winning the title.

Play was suspended at 2:13 p.m. due to lightning in the vicinity, with two groups of three yet to tee off for the final round on the Upper Course. Lightning continued to pop up in the region, continuously delaying play until a cell delivered rain, hail and the end of the championship around 4:30 p.m.

"I was battling in my head, do I want to go back out, or do I just want to be done and have the win," said Carpenter of his thoughts during the suspension. "It feels a little weird winning after 18 holes when it's a 36-hole event, but that's golf. It's a huge honor to win in memory of Michael Carter. Just looking at the names on the trophy, I'm definitely humbled."

Carpenter is in the midst of a strong strech of golf. After qualifying and competing in the Ike last month, Carpenter claimed stroke-play medalist honors two weeks ago at the 102nd Met Junior, where he advanced to the quarterfinal round. Just this Monday, he qualified for the 104th Met Open Championship, set for August 20-22 at Piping Rock Club.

"I would definitely say my putter has treated me well," said Carpenter of his recent play. "I switched putters right after the Ike. I've consistently been under-par the last three weeks and I feel really steady and confident in general."

Carpenter hopes the steady play continues through the week as he tees it up in the 117th Met Amateur Championship at Hudson National Golf Club.

Nathan Han of Somers, N.Y., finished one shot behind Carpenter with his 1-under 70, standing as the only other player to break par on the famed Lower Course. Han, who earlier this month advanced to match play and had one victory in the U.S. Junior Amateur, was playing in his sixth Carter Cup. He had a steady day, posting two birdies to one bogey.