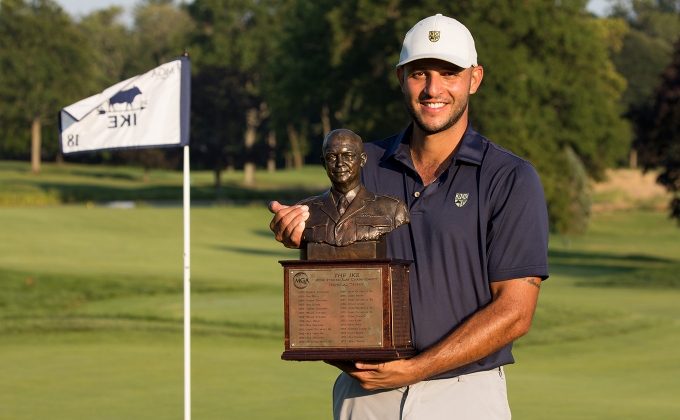 DARIEN, CONN. (August 11, 2020) -- With a chip in eagle on the 18th hole, Mark Costanza of Hamilton Farm captured the 65th MGA Ike Stroke Play Championship at the Country Club of Darien on Tuesday in dramatic fashion. With a final round score of 2-under 69, Costanza posted a 7-under 206 tournament total to edge out Ethan Ng of Knickerbocker by one stroke for the title.

It was a dramatic afternoon at Darien, as Ng and Darien’s own Ben Carpenter were each attempting to chase down Costanza, who led after both the first and second rounds. In the championship's second round on Tuesday morning, Costanza carded an even-par 71, but extended his lead to two shots over the field after Monday's 5-under 66 earned him a one-shot lead. “I was actually a little bit surprised that after shooting even that I was a couple ahead," said Costanza. "I thought that there might have been a couple guys that maybe went deep in that first round today, but I was thankful to have a couple-shot cushion."

Not far off the lead after 36 holes were Saptak Talkwar of the Golf Performance Center, Justin Lane of Woodstock, Ng and Carpenter, all two shots back the lead at 3-under.

Ng jumped to the top of the leaderboard during the final round, thanks to three birdies on Nos. 1, 3 and 6, which pushed him to 6-under for the tournament. He had a bogey-free round, coming up short on a lengthy birdie try on the par-3 14th and lipping out another birdie putt from just off the back of the green on the par-5 15th. He also made a clutch up-and-down par save on the par-4 17th. On the par 5 18th, his birdie putt from about 10 feet rolled past the hole for a round of 68, at which point he held a one-shot lead.

Meanwhile, Carpenter was using his local knowledge to finish with a 2-under 69, making him 5-under for the championship. After making just one birdie in his second round, he was able to make four more in the afternoon, keeping him under par. Carpenter, headed into his freshman year at Yale, finished in solo third at two shots back.

With Ng, a junior at Stanford, in the clubhouse at 6-under nearly an hour before he finished, Costanza began watching the leaderboard. “I know Ethan kind of tore it up and I was debating whether or not I should look at the scores. But, I ended up looking at it almost every hole. As soon as Ethan finished up at six [under], I knew I needed to make one more,” Costanza said. His birdie look on the par 4 17th slid just below the hole, so he needed a birdie on 18 to tie Ng and force a playoff. No playoff was needed as his chip from just off the green hit the mark and rolled right in.

“I knew if I could get to 18 with that opportunity to make a birdie, it would be good because it’s a shortish par-5 and I feel like I was pretty confident in making birdie there. I hit two really good three-woods—three-wood off the tee, three-wood in for my second shot and it was just hanging on the first cut,” Costanza described. “I was just thinking, ‘Hey, just make it up and down and get into a playoff and see what you can do.’ As soon as I hit it, it hit on the green and it started rolling out. I just kind of knew it was in because it was just tracking and that was it.” In the morning round, Costanza had made a bogey on the 18th hole after struggling with a tough lie in the rough.

Costanza, 31, has been on a hot streak this summer, winning the New Jersey State Open at Knickerbocker in July and then advancing to match play at the Met Amateur at Bethpage Black. With his win, Costanza is now a three-time MGA champion. A talented junior player, he won the MGA/MetLife Boys Championship in 2003 and the Met Junior in 2007. In 2003, as a 14-year-old, he qualified for and made the cut in the Met Open, played that year at Metedeconk.

Reflecting on his long tenure of competing in MGA events, Constanza said, “My junior golf career, I always sort of look at it—and a lot of other people would look at it—and say, ‘Mark was good when he was 13 or 14.’ I won the Boys and I won the Junior and up until maybe the [New Jersey] State Open this year, that was probably my biggest win that I’ve had.” Costanza, a former St. John’s golf team member, is just now the third player in the MGA history to win the Boys, Junior and Ike championships, joining Jeff Putman and Jon Saxton.

“Playing in all these events and this event in particular—I always remember talking to my parents and being like, ‘Hey, the Ike, it’s such a big event and I’d love to win it and I want to play in it.’ At 31, now I have a career and to be able to come out here and win it, it’s unbelievable. I can’t put into words how much this means to me,” he shared. Next week, Costanza will compete in the 105th Met Open Championship Presented by Callaway at Mountain Ridge.

Cole Ekert and Mac Bredahl of Fairmount will add their names to the Ike Team trophy, awarded to the two players from the same club with the lowest 54-hole score. The Fairmount duo edged out Darien’s Bob Stelben and Ben Carpenter by just one stroke for this title.

Prescott Butler of Piping Rock (2-under) and Brad Tilley (1-under) also finished under par for the tournament after impressive final rounds. James McHugh of Rye, Colin Dolph of Nassau, Lane and Talwar all finished at even, while Brendan Hansen of Spring Lake, George Roessler of Maidstone, recent Met Amateur runner-up Luke Sample of Old Oaks, and Garrett Engel of Old Westbury rounded out the top-ten finishers with scores of 1-over.

The top-ten finishers from this year’s championship are exempt into the 66th Ike Championship next year at The Bridge in Southampton, N.Y.

The Country Club of Darien was the ultimate host for this year’s championship and provided a thrilling finish. After dealing with Tropical Storm Isaias just one week ago, the course was in pristine condition thanks to Superintendent Tim O’Neill and his team. With thick rough and fast greens, Darien was the perfect challenge for this year’s Ike competitors.