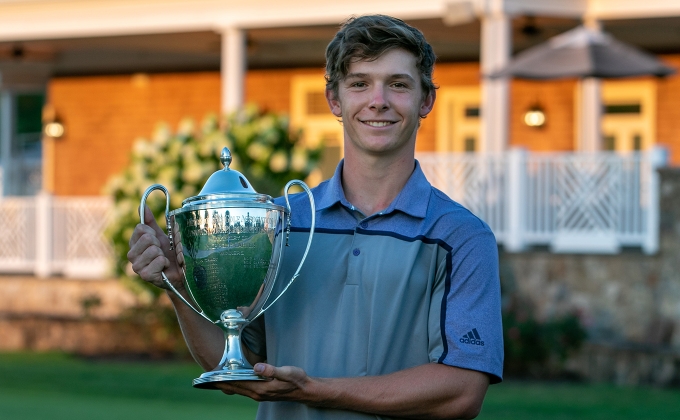 SUMMIT, N.J. (July 29, 2020) -- An eagle and a pair of clutch birdies down the stretch on Canoe Brook Country Club's North Course propelled James Allen of Scarsdale, N.Y., to capture the 18th MGA Carter Cup title, Wednesday. Allen fired a 4-under 68 on the South Course in the morning to capture the 18-hole lead, then closed with a 3-under 69 for his 7-under total and two-shot victory.

After a pair of bogeys early in his afternoon round, Allen had fallen behind fellow competitor Cole Ekert of Chatham, N.J. But, a hooked 5-iron into a right greenside bunker on the par-5 13th turned out to spark his closing stretch. "It was sitting down a little bit," said Allen of the lie, continuing, "so, I could pop it up and let it run. I had 40 feet of green to work with and I hit it perfecty and it went in."

Ekert made birdie on the hole and the two stood tied at 5-under, making it a two-man race down the stretch.

After matching pars on Nos. 13 and 14, both made birdies from the 25-foot range on the par-4 15th. Allen made his first, and assessed Ekert's birdie look to be a four or five-foot swinging putt across the green.

Ekert failed to get up-and-down for four on the par-4 16th, giving Allen a one-shot advantage. Allen then proved clutch with a birdie on the par-4 17th, knocking his approach within five feet and holing the putt.

"That was a big putt on 17," said Allen. "The two shot cushion meant that if I made par, I was going to win, so I didn't have to force birdie no matter what."

Allen proceded to hit 3-wood, 7-iron, wedge to safely find the par-5 18th green in regulation and easily two-putt for the victory.

Allen entered the invitational with high expectations and knew that he'd be in contention if he played well. Despite battling a stress fracture in his left hand, Allen rose to the challenge in what was the final junior tournament of his career.

For Allen, who's headed to Penn State this fall, the collegiate connection with Michael Carter provided even more meaning to the victory.

Ekert finished second with his 5-under 139 total while 103rd Met Junior Championship winner Luke Sample of New York City took third with a pair of 71s. Jason Lee of Westfield, N.J., and Charlie Berridge of Scarsdale, N.Y., rounded out the top five and those finishing in red figures for the day with 1-under 143s.

Canoe Brook served as an outstanding host for the MGA's junior stroke play championship. This was the first time the club welcomed the event, as traditional host Baltusrol began a renovation last fall and typical substitute host Winged Foot is preparing to host the U.S. Open in September. Canoe Brook's North Course hosted the Ike last season and is on a three-year rotating basis the site of the U.S. Open Final Qualifying. This was the seventh different MGA championship hosted by Canoe Brook.