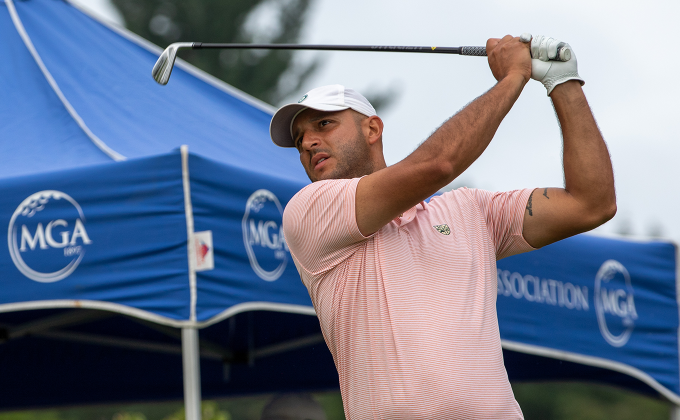 ELMSFORD, N.Y. (November 1, 2021) – The Metropolitan Golf Association is pleased to announce Mark Costanza of Hamilton Farm as the recipient of the 2021 MGA Jerry Courville Sr. Player of the Year Award, marking the eighth time in the award’s 46-year history that a player has earned the honor outright in back-to-back years. Costanza’s 2021 campaign was highlighted by consistent, high-level play, culminating with a runner-up finish in the U.S Mid-Amateur Championship.

The MGA Jerry Courville Sr. Player of the Year Award is presented annually to the Met Area amateur who compiles the best record in select events during the course of the year. It is based on a system in which players earn points for their finishes in designated local, national, and international championships. Costanza earned 797 points in just six events thanks to a steady run of high finishes. The award will be presented to Costanza at the MGA’s 124th Annual Meeting and Dinner on Wednesday, December 1 at Westchester Country Club in Harrison, N.Y.

Costanza, 32, collected his first points of the year by advancing through local qualifying for the U.S. Open Championship, firing an impressive 5-under 66 at Green Brook Country Club to co-medal alongside fellow Hamilton Farm member Pat Wilson.

As the championship season kicked into gear, Costanza was quickly faced with opportunities to defend his 2020 victories. He logged quality finishes in both attempts, tying for ninth in the 66th Ike MGA Stroke Play Championship at The Bridge in Bridgehampton, N.Y., and tying for seventh in the New Jersey State Open at Spring Brook Golf Club in Morristown, N.J.

Shortly after, Costanza carded rounds of 70-75 to fall into a 5-for-2 playoff for the last match play positions in the 119th Met Amateur Championship at Plainfield Country Club in Edison, N.J. A par on the third playoff hole earned Costanza the final slot and matched him against 2019 MGA Player of the Year and past Met Amateur champion Chris Gotterup of Rumson.

The duo put on a show early, combining for six birdies and an eagle in the first four holes. The fireworks continued on the second nine, where Costanza carded five birdies in seven holes to close out the match by a 3-and-2 margin. While Stanford senior Ethan Ng defeated Costanza in the afternoon, Costanza picked up 100 points for advancing to the quarterfinals.

In late August, Costanza’s consistency continued as he fired rounds of 71-69-69 in the 106th Met Open Championship Presented by Callaway at Hudson National Golf Club in Croton-on-Hudson, N.Y. His start—a double bogey on the par-4 10th—in the event exemplified what Costanza believes has been a key reason for his high finishes over the last couple years.

“In year’s past, especially as a younger player, I think I would have let that frustrate me a lot more than it does now,” Costanza says. “I think that’s maybe a testament to my confidence to say, “hey, I have 53 more holes in this event. There’s plenty of holes that I know I can make birdies, so don’t let this one mistake that you made domino effect into the rest of your round.”

Costanza birdied the very next hole and proceeded to finish tied for sixth in the championship, earn 200 points, and move atop the season-long points race.

At this point, Costanza's wedding date approached and he had only one event left on the schedule: the 40th U.S. Mid-Amateur Championship at Sankaty Head Golf Club in Siaconset, Mass.

“This year going into the Mid-Am, I had a completely different mindset,” says Costanza, who’s first USGA event was the 2019 U.S. Mid-Amateur, in which he was focused on the experience. “I really felt like I had a good chance to compete for the title and to potentially win the event because I knew based on how well I had played since the 2019 U.S. Mid-Am, if I played anywhere near my best golf or played my consistent game, I could be right there in the end.”

Costanza did just that, making a run all the way to the final. Though he fell to 2016 MGA Player of the Year Stewart Hagestad by a 2-and-1 margin, he was proud of his performance, especially after falling into a 7-hole deficit through the opening 11 holes of the 36-hole match.

“I lost, but I feel in a way I almost won just because in that second 18 to be able to come back and play really well and tighten up the match it felt really gratifying to me,” says Costanza. “I probably could’ve folded in that second 18 and no one would have really said anything—Stew’s a great player and it’s a really big stage—but to come out, make some birdies and really make a run at it, I was proud of myself for doing that.”

The win added 300 points to Costanza’s total and after the completion of the MGA Mid-Am, sealed his second straight year of capturing the title.

“To be on that list just once is an incredible honor, but to have it twice and twice in a row it’s very special,” says Costanza of winning the award again.

Brad Tilley of Sleepy Hollow had bookend season victories at the Richardson Memorial and Boff Invitational while also adding a second-place finish in the Westchester Open to finish second (625 pts) on the year’s listing. Darin Goldstein of Deepdale (520 pts) and Met Amateur champion Garett Engel (498 pts) of Old Westbury finished in the third and fourth spots. Michael Brown of Rock Spring and Trevor Randolph of Arcola both tallied 475 points, rounding out the top five spots made entirely of mid-amateur players.