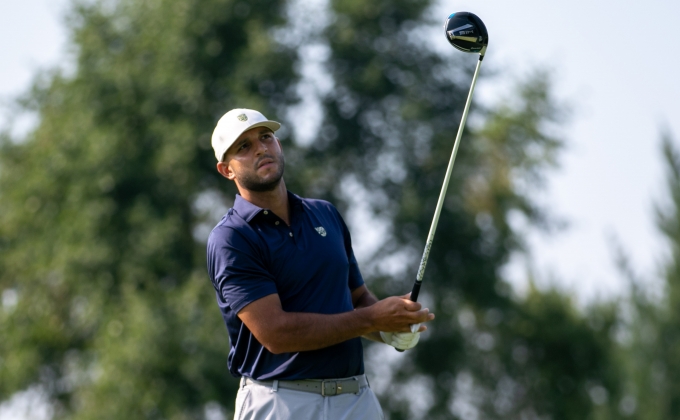 ELMSFORD, N.Y. (November 1, 2020) – The Metropolitan Golf Association is pleased to announce Mark Costanza of Hamilton Farm as the recipient of the 2020 MGA Jerry Courville Sr. Player of the Year Award. Playing a full tournament schedule for the first time since his standout junior days, Costanza captured the New Jersey State Open and Ike MGA Stroke Play Championship to earn the coveted award.

The MGA Jerry Courville Sr. Player of the Year Award is presented annually to the Met Area amateur who compiles the best record in select events during the course of the year. It is based on a system in which players earn points for their finishes in designated local, national, and international championships. Costanza collected 929 points, exhibiting consistent high-level play throughout the entire season.

“The player of the year is about your consistency throughout all the events and if you’re not winning, are you still in contention, are you still shooting good rounds,” said Costanza. “So, it’s very gratifying for me to know that I’ve put together a season like that where I had earned the points to outlast some of the best players in the area.”

Without any exemptions for the season, Costanza began the compacted year with qualifying rounds. His first opportunity for points came in the New Jersey State Open. He opened with a 73, but bounced back with a 7-under 65 to jump into contention. A 3-under 68 led him to a three-hole aggregate playoff, where he defeated Canoe Brook Country Club’s Tony Perla by one shot.

Costanza, using confidence from qualifying and competing well in the U.S. Mid-Amateur Championship the year prior, knew his game could contend, but had to reevaluate the season after achieving what he almost thought of as a long-term goal right out of the gate.

“I felt because of that confidence, every event that I teed it up in the rest of the year, it was almost like I knew if I played well, that I’d have a chance to win,” said Costanza. “That was sort of my mentality.”

Costanza next advanced to match play in the 118th Met Amateur Championship at Bethpage Black and finished third in the New Jersey State Amateur, placing him more than 100 points clear of Brad Tilley of Sleepy Hollow Country Club in the season-long points race.

At the Ike, Costanza opened with a 5-under 66 at Country Club of Darien. He held a two-shot lead entering the final round, when Ethan Ng of Knickerbocker began to make a run. Ng’s closing 68 earned him a one-shot clubhouse lead as Costanza played the closing stretch.

Still needing birdie to tie on the par-5 18th, Costanza hit a pair of purely struck 3-woods to find the back collar of the green.

“I had playoff in my mind,” said Costanza. “I was just thinking make up and down.”

Costanza hit the delicate chip purely, the ball tracking the hole from the moment it bounced onto the green. “Probably 10 feet out, my eyes got big and I saw it rolling and I just thought, ‘That thing’s going in.’”

The ball dropped for eagle, leading to a thrilling and meaningful walk-off victory.

“At this point in my life—31 years old, having a career—I would have thought winning that event was something that was unattainable,” said Costanza, who claimed both the MGA Boys and Met Junior championships as a junior and felt that he had unfinished business with his golf career.

He increased his lead in the points race, leading him to look toward earning the year-end award. “It started to creep in my mind after the State Open, but after the Ike it really became something where I felt it was mine for the taking,” said Costanza.

Luke Sample of Old Oaks then threw a curve ball into the equation as the 17-year-old became the eighth amateur winner of the Met Open Championship Presented by Callaway and the youngest-ever player to hoist the Mandeville Trophy. The win—paired with a win in the Met Junior and a runner-up finish in the Met Amateur—placed him just 30 points behind Costanza.

Costanza continued his steady play to close the season, tying fourth at the 14th MGA Mid-Amateur Championship to extend his lead to 100 points over Sample.

While both had one event left, Costanza ended up finishing as runner-up in the New Jersey Mid-Amateur Championship while Sample's point total remained the same upon closing the season in the Westchester Open Championship.

“When I look at the names of the guys who have won in the past, they’re remarkable players,” says Costanza, who emphatically placed his name among the Met Area’s top competitors following his play in 2020.

Sample (754 points) finished second in the listing, but did earn the 2020 MGA Junior Player of the Year Award, Presented by Callaway in runaway fashion. Tilley (680) finished third in the listing behind wins in the Westchester Amateur, Westchester Mid-Amateur and Boff Invitational, while Ng (640) and Sam Goldenring (330) of Brooklake stood fourth and fifth.

With the MGA’s Annual Meeting and Dinner shifting to an online collection of presentations for 2020, Costanza’s achievement will be further recognized in the upcoming issue of The Met Golfer and in video.