Costanza, Wilson Fire 5-Under To Lead Field As Seven Advance At Green Brook

Costanza, Wilson Fire 5-Under To Lead Field As Seven Advance At Green Brook 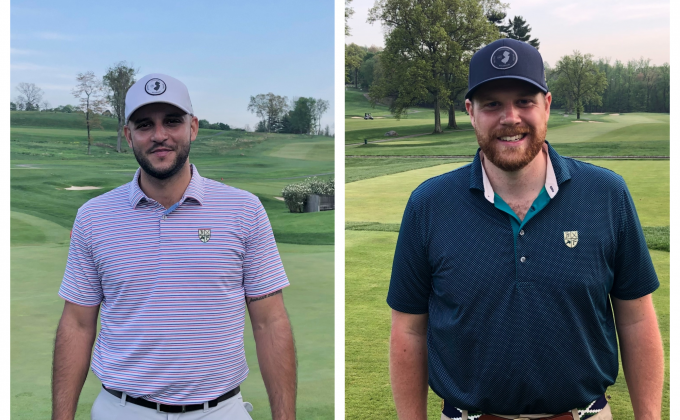 CALDWELL, N.J. (May 4, 2021) -- Mark Costanza of Morristown, N.J., and Pat Wilson of Andover, N.J., fired low rounds of 66 to finish 5-under and lead the field at the U.S. Open Local Qualifying Round at Green Brook Country Club. The two were joined by William Hook of Tnafly, N.J., Danny Harcourt of Fanwood, N.J., Nicholas Bova of Hillsborough, N.J., Daniel O'Rourke of Milford, N.J., and Chris Gotterup of Little Silver, N.J. William O'Neil of Morristown, N.J., and JC Deacon of Gainesville, Fla., claimed the two alternate positions.

O'Rourke, Gotterup, O'Neil and Deacon all had to fight for their spots in a four-man playoff. O'Rourke was the first player to claim his qualifying slot with a birdie on the 3rd playoff hole. Gotterup birdied the fifth playoff hole to grab the last of seven advancing positionsspots.

The leaders and good friends Costanza and Wilson, found their way to 5-under in slightly different manners. Costanza, the reigning MGA Player of the Year, was cosistent throughout, while 2013 Met Amteur champion Wilson used a torrid finish, going 4-under on the final nine, to hop all the way to the top of the leaderboard.

"I was happy with the front nine I played," said Wilson, who is on the way to regaining his amateur status. "I just started making a few more putts and took advantage of the back nine a little bit more. It was a great way to finish the round."

"Driver and putter were working very well," said Costanza. "I hadn't seen the course before, but when you're driving it well you can kind of get away with that. Both nines are very different but my game was clicking on each side."

Professionals Hook and Harcourt were the low rounds of the morning wave, shooting 3-under 68s. While Harcourt started on the back and Hook started on the front, both used Nos. 10-18 to vault them to the top of the leaderboard, both shooting 3-under through the stretch. In the afternoon, professional Bova took advantage of the three par fives, using two eagles (3, 13) and a birdie to play them in 5-under en route to a 3-under 68 of his own.

Professional O’Rourke and 2019 Met Amateur champion Gotterup slid in just after the two leaders, both with 2-under 69s. O’Rourke went 1-under on each side and Gotterup used four birdies on his way in to make up for three bogeys over the previous five holes.

In total, 19 players finished under par on the day.

This was the fourth of the MGA's five five total U.S. Open local qualifying rounds, with the last taking place May 10 at Whippoorwill Club in Armonk, N.Y.. The MGA will then conduct final qualifying for the 121st U.S. Open Championship at Old Oaks Country Club and Century Country Club in Purchase, N.Y., on June 7.