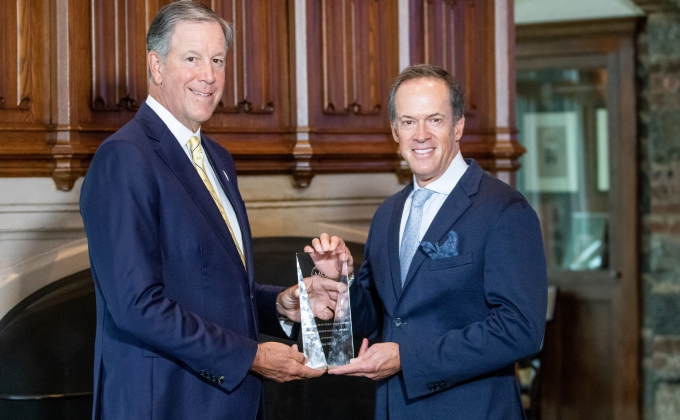 Hicks with the MGA's Jeff Holzschuh.

ELMSFORD, N.Y. (November 30, 2020) – The Metropolitan Golf Association is pleased to announce Dan Hicks as the recipient of its 2020 Distinguished Service Award in recognition of Hicks's commitment to giving his time and support to the game, while representing the spirit of the game both on and off the air.

The MGA Distinguished Service Award, created in 1973, is presented annually to a candidate who has contributed “distinguished service to golf and its related activities, consistent with the valued standards and honorable traditions of the game.” Some of its earliest winners include Joe Dey, Harry Cooper, Robert Trent Jones, Sr., and P.J. Boatwright, while names such as Dave Anderson, David Fay, Jimmy Roberts, Suzy Whaley, Jay Mottola and Jim Nantz have received the honor in recent years.

“Dan Hicks is one of the most respected sports broadcasters of his era. He has distinguished himself across several sports, but his passion for golf is always evident,” said Jeff Holzschuh, past president of the MGA. “Dan, like all of our past DSA recipients, has given his time and resources to many charitable and community groups in the Met Area, including the MGA. His contributions to golf have been recognized widely, and we are so pleased that Dan is our 2020 honoree.”

His on-air accomplishments are impressive and have taken him all over the world, and so is his commitment to giving his time and support to the game while championing its ideals and values.It was an unexpected pleasure for the Greenwich, Conn. resident to call this year’s U.S. Open at Winged Foot, his home club.  FOX had acquired the rights to the Open beginning in 2015, but football commitments created a conflict for the network once Covid-19 disrupted the event’s schedule.  NBC took over the full USGA media rights from FOX late in the summer, and Hicks suddenly had a home game. “It was the experience of a lifetime,” Hick Said. “[To be] at Winged Foot, knowing the golf course and the people here and how excited they were to have this U.S. Open here -- I felt a little pressure, actually. I really did. You don’t want to come across as cheerleader, this place sells itself on its own, it’s one of the great gems in all the world, so I kind of had to ride this balance of having the excitement of doing a U.S. Open at Winged Foot [while] showing people why it’s such a special place. When I look back at my career and it’s all said and done, the 2020 U.S. Open at Winged Foot will rank near the top.”

Hicks has been generous in sharing his talents at the club during the Anderson Memorial Invitational, one of the country’s premiere amateur events. “He’s helped us out at several Andersons, interviewing Johnny Miller for us, and he’s always quick to speak at a member guest,” says head professional Mike Gilmore.  “He’s very dedicated to the Winged Foot membership.”

“Dan does so much for golf -- he understands the culture of the game, the importance of amateurs and an association like the MGA that helps grow the game in this part of the country,” said Pete Bevacqua, Chairman of NBC Sports Group and a fellow Winged Foot member. “He is passionate about the caddie program here at Winged Foot, and he’s become a real leader of the game. It’s not just what he does on air as part of our golf telecast, but really giving back to the game on the grass roots level, it’s so impressive.”

With the MGA, Hicks is quick to answer “yes” and assist with a variety of projects, like when he hosted the championship media day in 2015 for the historic 100th playing of the Met Open. Hicks also shared his talents and provided the narration for the 2020 MGA Hall of Merit video, part of the MGA Honors platform.  Gene Westmoreland, the MGA’s longtime former Director of Rules and Competitions, has shared plenty of rounds on the course with Hicks. “Dan Hicks regularly and graciously adds his internationally-known and respected name to grow the game,” said Westmoreland. “Despite a busy schedule that takes him around the world, the Met Area is his home and he remains a regular, influential and supportive friend to the MGA and all area golfers.”

As an advocate, leader, and true representative of the game’s highest values, Hicks embodies the qualities of a recipient of the MGA’s Distinguished Service Award.  “It’s an unbelievable honor to know that you’re making a difference out there and to know that people are watching,” Hicks said. “When I’m driving around the golf course or any sporting event that I’m at, when a young kid comes up and says to me, ‘Hey, do you have a couple of moments, I’m interested in getting into sports broadcasting,’ [I believe] you have to take the time, because I remember when I was that kid who needed that helping hand. I always told myself that however far you take it in this business, be one of those guys that’s going to look down the ladder and help somebody else up.”

Read the full profile on Dan Hicks from the November/December issue of The Met Golfer.