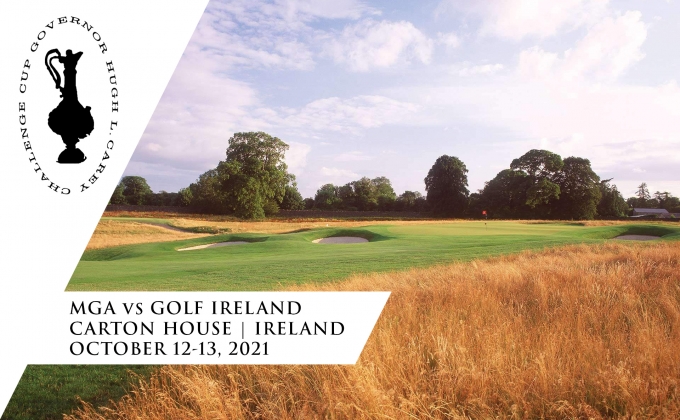 ELMSFORD, N.Y. (February 19, 2021) – When the Metropolitan Golf Association and Golf Ireland square off in the 16th Governor Hugh L. Carey Challenge Cup, teams will expand from six members to 10 with the addition of four women’s competitors to both sides.

The biennial competition is slated to take place October 12-13 at Ireland’s Carton House and the addition of women’s competitors brings a welcome update to the event, which was first played in 1990.

“The Carey Cup has been a central part of MGA tradition since it began in 1990, and it has been a collective goal to make this a more inclusive competition,” said Brian R. Mahoney, MGA Executive Director. “The MGA enthusiastically anticipates this year’s matches and revealing its more diverse team format.”

While teams will now compete for 20 points instead of just 12, the matches will continue with four-ball and foursomes on day one, followed by the concluding singles matches the next day.

“We are looking forward to staging the Carey Cup at Carton House this October,” said Chief Executive of Golf Ireland, Mark Kennelly. "It is particularly fitting that in its first year, Golf Ireland would host these matches when they will include mixed teams for the first time. We will be working hard to make sure the event is a memorable one for all involved.”

Golf Ireland was established in 2019 following an overwhelming endorsement by Ireland’s golf clubs. It became operational in January 2021, succeeding the Golfing Union of Ireland (GUI) and the Irish Ladies Golf Union (ILGU) to become the single governing body for golf in Ireland.

Carey Cups on Irish soil have traditionally taken place in the spring, but both sides consider health and safety for competitors and all involved as the top priority and anticipate a better opportunity to compete come fall.

“The Carey Cup is a highly anticipated event on our calendar, said Mahoney. “We are optimistic for October and continue to work with our partners in Golf Ireland to follow all policies and procedures as we all monitor the evolving situation our world is facing.”

The event officially kicks off on Monday, October 11 with an "Am-Am," in which each of the MGA and Golf Ireland players will be paired with three amateurs in a best ball competition.

The matches will take place on Carton House’s Montgomerie Course, which has hosted three Irish Opens (2013, 2006 and 2005) and the 2018 World Amateur Team Championships. Designed by Colin Montgomerie, the course was awarded “Best New Design of the Year” by Golf World when it opened in 2004. The Carey Cup was played at Carton House in 2005; the Irish defeated the MGA to win the cup.

After originating as the Metedeconk International Challenge Cup in 1990, teams played once again in Ireland in 1992 but did not meet in 1994. In 1996, the matches were conducted again thanks to an effort spearheaded by the late Governor Hugh L. Carey, who envisioned the matches as an opportunity to foster sportsmanship and goodwill between the countries. Ever since, the matches have been played in his honor with a spirit of camaraderie and competition.

The MGA will aim to continue to carry momentum against its Irish friends, following a thrilling come-from-behind victory at Arcola Country Club in 2019. The team faced a 4-2 deficit, but won 4.5 of 6 total singles points to secure the comeback. The all-time record stands at 8-5-2 in favor of the Irish, but the MGA now owns a 3-1-1 lead in the last five playings.