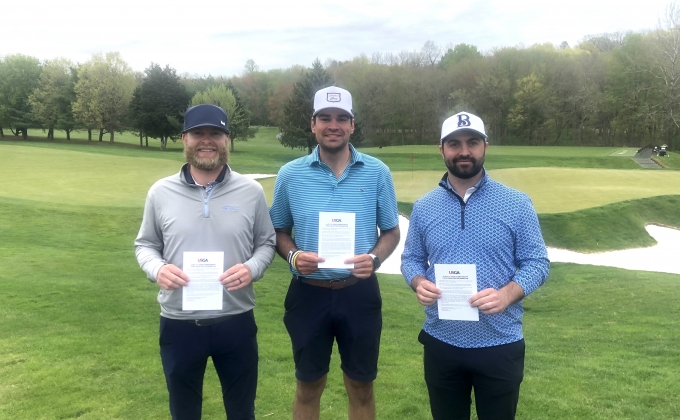 DeJohn's round was fueled by six birdies. "I drove the ball really well today, which was the most important for me," he said. "I fortunately made some putts early, but I just played solid all day. I haven't been to the final qualifying since I was in my mid-20s, so to be back and be a part of the event, I'm looking forward to it and it should be a lot of fun." This will be DeJohn's fourth trip to Final Qualifying and first since 2012. After taking a break from golf and recovering from wrist injuries sustained in a car accident in 2017, DeJohn, 33, regained his amateur status and got back into competitive golf just last year.

Despite claiming that he didn't drive the ball well, Murphy recorded four birdies and just one bogey to share medalist honors with DeJohn. "I made a good amount of putts, and only had one bogey all day, early on on two, other than that it was just a lot of pars," Murphy said. This is the first trip to Final Qualifying for Murphy, 29. "I have no idea what to expect, so I'm open minded and I'll see what happens with it, I'm excited about it," he said.

Lanza finished one stroke behind the co-medalists with a 2-under 69. He also recorded just one bogey, balanced out by three birdies. Lanza, 24,  is a 2019 graduate of Concordia College, where he was a member of the golf team and now assists the team in a coaching capacity. This is his first time advancing through local qualifying.

Ireland's Cian Curley earned the first alternate position with a 1-under 70.

Five players finished at even to force a playoff for the second alternate position: Luke Sample (a), Max Holm (a), Paul Pastore, Nicholas Pandelena, and Saptak Talwar (a). With an eagle on the second playoff hole (no. 9), Max Holm of Walnut Creek, Ca., earned the spot.