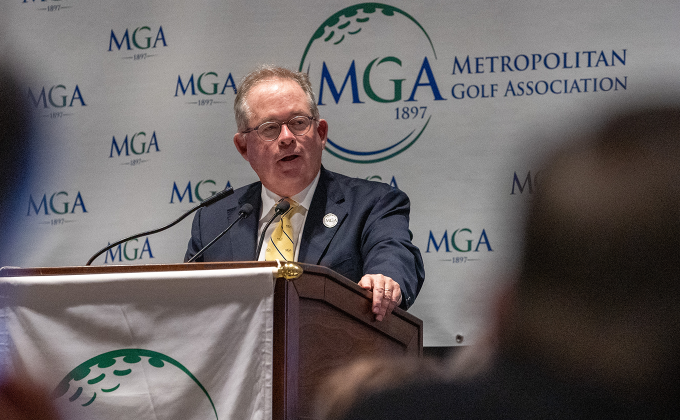 RYE, N.Y. (December 9, 2022) – The Metropolitan Golf Association held its 125th Annual Meeting and Dinner on Wednesday at Westchester Country Club, celebrating the 2022 season and all who made it a success. The meeting portion of the evening was highlighted by the election of Patrick Donnelly as the Association’s 66th President, while the dinner featured the recognition of Brad Tilley of Sleepy Hollow as the 2022 MGA Jerry Courville Sr. Player of the Year and Mike Davis as the 2022 MGA Distinguished Service Award recipient.

More than 200 club representatives, committee members, champions, volunteers and representatives from both local and national golf organizations were in attendance at Westchester during the evening.

Andrew Stock delivered his final President’s report in the opening meeting, detailing the MGA’s successful 125th year of service to golf in the Met Area and expressing confidence for the years to come. Donnelly, of Garden City Country Club, expressed his gratitude to serve the game as the MGA’s newest President, reflecting on his upbringing in the game and how the MGA is well positioned to not only continue its promoting, preserving and protecting of the game, but to increase the accessibility and reach of the game.

Donnelly will serve alongside Vice President Ned Zachar of GlenArbor and Secretary and Treasurer Gregg Angelillo of Baltusrol. Additionally, Jon Betlow of Baltusrol, Joy Kaye of GlenArbor, and Chris Robinson of Sleepy Hollow were all introduced as newly elected members of the Executive Committee, while Philip Halpern of Westchester and Beth Post of Quaker Ridge were recognized and thanked for their years of service on the Executive Committee.

A video shared the stories of Helen Hicks and Dave Marr, 2022’s two inductees into the MGA Hall of Merit, part of the MGA Honors Presented by Stifel. Hicks, a Long Island native, was a trailblazer in the women’s game, winning the 1931 U.S. Women’s Amateur, competing on the first U.S. Curtis Cup team and standing among the 13 founders of the LPGA. Marr moved to the Met Area from Texas and blossomed while working under Claude Harmon at Winged Foot before competing on the PGA Tour before becoming one of the game’s remarkable journalists and broadcasters.

Tyler Lee of Franklin Lakes, N.J., who recently committed to play collegiately at University of California Berkeley, was on hand to collect the 2022 MGA Junior Player of the Year Award, Presented by Callaway. While not present, longtime volunteer Joe Bardon of Chatham, N.J., was honored as the 2022 recipient of the Jerry Mahoney Award, which goes to the Rules and Competitions Committee’s Volunteer of the Year.

Attendees also heard from USGA CEO Mike Whan, who joined MGA Director of Communications Helen Farrelly for a conversation to close out the meeting portion. Whan reflected on the MGA and USGA’s longtime relationship, shared the importance of continuing to make golf more accessible, described the success and joy felt around the inaugural U.S. Adaptive Open, and discussed some of his goals for the USGA.

After a cocktail hour, attendees filtered in for dinner and were welcomed with a video recapping the championship season.

Tilley was also introduced with a video chronicling his standout four-win season that led to his Player of the Year honors. The 39-year-old reflected on the season, shared his gratitude for competing in the Met Area and delivered a heartfelt thanks to his family and friends for their support and role in his success.

The evening concluded with Davis, the former USGA CEO, accepting the MGA’s highest honor in its Distinguished Service Award. Davis also shared insight to the MGA and USGA’s relationship and his great honor to accept such an award, especially as he knew or has known many of the past recipients of the award. Davis expressed his thanks to many in the room and their role in serving the game, while closing out by sharing briefly about his new project alongside Tom Fazio II in developing a course as part of the new 54-hole Apogee Club near Hobe Sound, Fla.