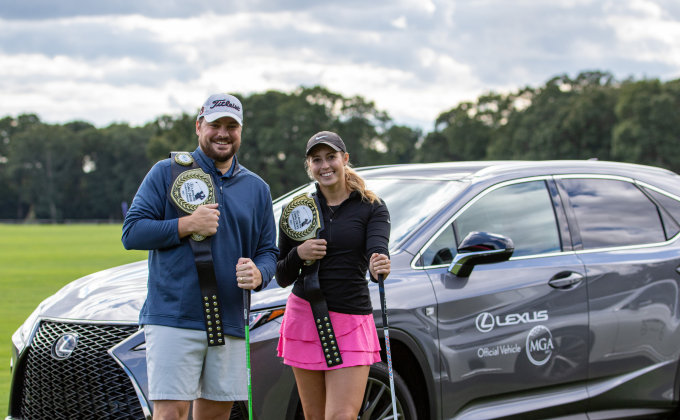 Tyler Hosking of Mendham took home the championship belt in the men’s division, getting into the finals by just one yard over Raymond Courtney of Hudson Hills. Hosking was the final golfer to take his swings in the preliminary round and was able to edge some big numbers posted earlier in the day. Among them, Adam Graziani at 343 yards, Richard Nicholas at 341 yards and Travis Demarco at 338 yards. In the finals, Hosking then took on Jack Collins of Shorehaven, who had the top qualifying number at 356 yards. Both men blasted drives of 357 yards to set up a playoff, with Hosking prevailing after a 345-yard drive.

Averee Dovsek of Eisenhower Park won the women’s championship, belting a 280-yard drive in regulation and following that up with a 277-yard drive in the finals. She took down Jen Doppelt, who edged Carly Redpath of Siwanoy to make it to the finals. Redpath was one of the first women to tee off and set a mark of 251 yards during her session. Doppelt was in the final group of the women’s competition and just like Hosking was able to make it through to the finals with the second longest drive. Doppelt smashed a 267-yard drive but was overtaken by Dovsek in the head-to-head final.

“I knew I was hitting well this whole week,” said Dovsek, a California native that plays on the women's golf team at Hofstra. “Leading up to this I prepared a little bit more than I have in weeks past. I really wanted 280 and I got that in the first round so after that I knew I could do it.”

Competitors of all ages blasted away in the first Lexus Long Drive Championship. The competition, open to all ages, featured five-minute rounds for each competitor. Golfers were given 10 swings in those five minutes and the longest drive was taken.

In the senior division, Timothy Ormsby of Nassau Players Club took the top spot. His drive of 299 yards was nine yards better than the next closest competitor. Jack Collins, who was bested in the finals, was the longest Mid-Am in the field. His drive of 356 yards was the top mark before the final round. In the Junior Division (18 and under) Drew Munn of Muttontown impressed with a drive of 320 yards. In the Boys/Girls Division (15 and under) it was Christian Vinas’ drive of 293 yards that stood on top.

The event, the first of its kind at the MGA, featured plenty of thrills, with drives over 300 yards the norm on Thursday afternoon.

“Long drive is tough because you really have to separate your mechanics from your speed,” said Dovsek. “If you focus too much on mechanics your speed lacks though, so finding that balance is really necessary.”

Both Dovsek and Hosking took home the championship belts, a year’s supply of Callaway golf balls and an Odyssey putter. Both competitors also said they would return to defend their belts in 2022.

The Lexus Long Drive Championship featured golfers from around the Met Area. Callaway provided golf balls and prizes for the event and all drives and stats were measured with TrackMan technology.