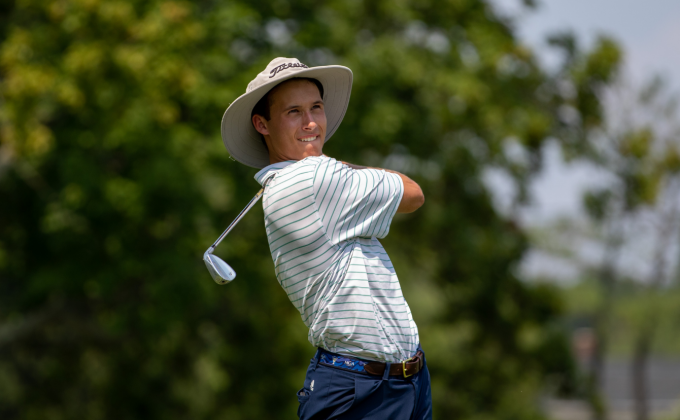 SPRINGFIELD, N.J. (July 27, 2021) – Nathan Drogin of Essex Fells, N.J., came from six strokes back during the final round, tying a Carter Cup record, to claim the 19th iteration of the event at Baltusrol Golf Club. Drogin fired a 5-under 67 on Baltusrol’s Lower Course in the afternoon to jump ahead of the morning leaders and claim the title.

“It’s still all so surreal,” said Drogin. “There are so many good players in the field and I never expected to win this going in. It’s just an amazing feeling and knowing that I played good golf down the stretch too is a great feeling.”

In Drogin’s very first trip to Baltusrol, he scattered two bogeys around seven birdies during the final round. He closed strong, going bogey-free over his last nine holes. The 17-year-old birdied the par-5 18th hole with a three-foot putt, which ultimately made the difference.

“Both courses are so good and having never seen them before I just wanted to keep things simple,” said Drogin. “I knew going into 18 that it was a good birdie hole for me and I hit two good shots to get near the green and give myself a chance. I had about a three-foot putt for birdie and was able to knock it in.”

Early in round two, Luke Sample of New York City and Charlie Berridge of Scarsdale, N.Y., stood several strokes ahead of the rest of the field. As the duo made the turn and started to fall back to the rest of the pack, Drogin continued his silent charge. He played Nos. 12-14 in 2-under to put himself in position heading into the back-to-back par-five finish at Baltusrol.

“I had about a six-foot putt on all three of those holes,” said Drogin. “I was able to make the putts on 12 and 14 and just missed on 13. I had a lot of confidence with the putter all day.”

On top of tying the largest comeback victory after 18 holes in Carter Cup history, Drogin also finished one shot behind the lowest 36-hole score and lowest final round score in the championship’s history as well. Clutch par saves on 15 and 16 paved the road and helped complete the comeback.

Derek Gutierrez of Cranford, N.J., began the afternoon seven shots back, but also fired a 5-under 67 to finish in a tie for second at 5-under with Dean Greyserman of Short Hills, N.J. Greyserman had an opportunity to tie Drogin, needing birdie on the last hole but wound up with a par.

In the final grouping, Berridge and Sample battled all of round two to stay close to the lead. Berridge started the round at 7-under but shot 39 on the back nine to close at 3-over for the final round. Sample made six birdies in the second round, but also made six bogeys, finishing where he started round two, at 4-under.

The 19th Carter Cup was contested over both the Upper Course and Lower Course and was the Lower Course’s first competitive event since its 18-month restoration completed by Gil Hanse and his team. The project turned back the clock to Tillinghast’s original intent, and replaced fairway bunkers, restored twisting fairways, returned greens to their original sizes, reintroduced ramp approaches to greens and repositioned greenside bunkers.