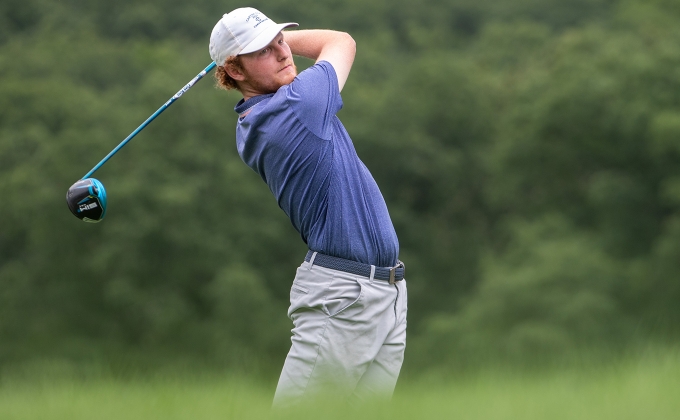 NEW CITY, N.Y. (July 13, 2021) – Cole Ekert of Chatham, N.J., locked up the top seed of the 104th Met Junior Championship Sponsored by MetLife on Tuesday morning as round two of stroke play qualifying completed at The Tuxedo Club following Monday evening’s suspension of play due to weather.

Ekert, who carded a 1-over 72 in Monday’s opening round, posted 1-under 70 to land at even-par, besting the trio of two-time MGA/MetLife Boys champion Reed Greyserman of Short Hills, N.J., Steven Lee of Scarsdale, N.Y., and Tyler Lee of Franklin Lakes, N.J., by one shot.

“I didn’t quite have the putter rolling for both rounds, but I drove it well and kept it in play and gave myself a lot of short wedge opportunities, which I feel like you have to do here because the greens are so tough,” said Ekert before match play.

Play was suspended at 5:32 p.m., Monday evening due to severe thunderstorms, ultimately halting play for the evening.

“I was playing well in the second round yesterday, so I was just trying to carry that into today,” said Ekert. “I knew I was in a good spot, so if I could shoot anywhere from 1-over to 1-under or better today, I’d be just fine.”

Ekert is aiming to make another run in the bracket after his semifinal appearance in 2020 at Rockaway River.

“It’s definitely exciting, especially given it’s my last year in the Met Junior,” he said. “To get back into match play and hopefully have a chance at going deep again is exciting.”

Ekert isn’t the only competitor with prior Met Junior match play experience, as Tyler Lee also advanced to last year’s semifinals, while both Greyserman and Colin Summers of Westfield, N.J., advanced to the quarterfinals in 2020.