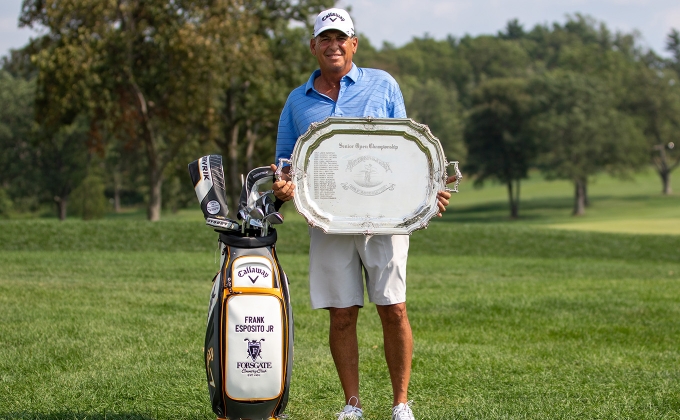 WEST ORANGE, N.J. (August 25, 2020) – Frank Esposito, Jr., of Forsgate captured the 24th MGA Senior Open Championship at Essex County Country Club on Tuesday. A two-hole playoff was needed to determine the champion after Esposito, first-round leader Ed Whitman of Knickerbocker, and Mike Meehan of Old Westbury finished tied at 1-under for the 36-hole championship. With a birdie on the second playoff hole, Esposito captured his first MGA Senior Open title.

After a 1-under 70 in the first round, Esposito was three shots off the lead held by Whitman and Craig Thomas of Metropolis headed into the final round. “I knew how tough it would be, yesterday the pins were kind of in the middle of the greens and I knew they’d stretch it out a little bit, kind of tuck some pins, so I was just trying to be patient and just go along with what I was doing yesterday, I played pretty well yesterday,” he said.

Esposito made three straight birdies on nos. 7, 8, and 9 to jump a few spots on the leaderboard and share the lead with Whitman.

As the wind picked up on the back nine, he had bogeys on 10 and 15, and didn’t look at the leaderboard until hitting a drive down the middle of the fairway on 16. “I had no idea how I was doing until I looked at my phone on 16 and saw that I was actually one shot back, and I had just bogeyed 15, so I just tried to stay as patient as possible, because this is a golf course where you really need to pick your spots for when you’re going to be aggressive.”

He stayed patient and consistent with pars to finish the round at even par and 1-under for the tournament. Meehan was already in the clubhouse at 1-under after rounds of 71-70. They were soon joined by Whitman, who struggled with bogeys Tuesday but made a birdie on the par-4 17th and a good up-and-down for par from the right greenside bunker of 18 to finish tied for the lead.

The trio headed to the 18th to start a sudden-death playoff, and all three made pars on 18, with Meehan making an up-and-down from well off the front of the green after his approach from the left fairway bunker caught the false front and rolled back down the hill. On the second playoff hole, the par-5 13th, Esposito had a great up and down from the right greenside bunker to make birdie and claim the title. “On 13 I hit a good drive, I had about 260 [in],” he shared. “My play was just to try to get it up as close to that green. I hit a good shot, I just pushed it a little, but I hit it in an absolutely perfect spot. In that bunker with a little uphill lie, I couldn’t have had it any easier.”

Esposito has played in the MGA Senior Open and finished in the top-10 every year since 2013 when he became eligible for the event at age 50. He entered the event coming off of a T31 finish at the Met Open at Mountain Ridge last week. “My game was ok, I was working on a few things, driver was a little shaky, I kind of figured that out a little bit,” he said. “I was looking forward to this, coming here, because I know this golf course, and it’s a challenge, so playing it a number of times kind of helps.”

“It’s always nice to win, you don’t win all the time. You look down the list of all of the players, all the great players, and to come out on top is very special,” he said. Esposito is a two-time winner of the Senior PGA Professional Championship (2017 and 2014) and has competed in numerous Champions Tour events in recent years.

Close behind on the leaderboard were Ken Pridgen of the NJ PGA at 1-over 143, David Young of Sleepy Hollow and 2016 champion Jim McGovern of White Beeches at 2-over 144, and 2013 champion Craig Thomas at 3-over 145. Young had made the cut on the number and climbed the leaderboard behind Tuesday's low round of 2-under 69.

A total of 44 players made the cut with scores of 4-over 75 or better to advance to Tuesday's final round. The top-25 finishers from this year’s championship are exempt into the 25th MGA Senior Open, to be played at Old Westbury Golf and Country Club in Old Westbury, N.Y.

Essex County Country Club is one of the MGA's 26 founding members and has a long history of hosting MGA championships. It last welcomed the Ike in 2016. This is its first time hosting the MGA Senior Open. The club was founded in 1887, with its present day course featuring work of A. W. Tillinghast, Seth Raynor and Charles Banks. Elevated greens guarded by deep, flat-bottomed bunkers and a sensational quartet of par-3s highlight the layout, while its back nine is regarded as one of the most challenging in all of the Met Area.