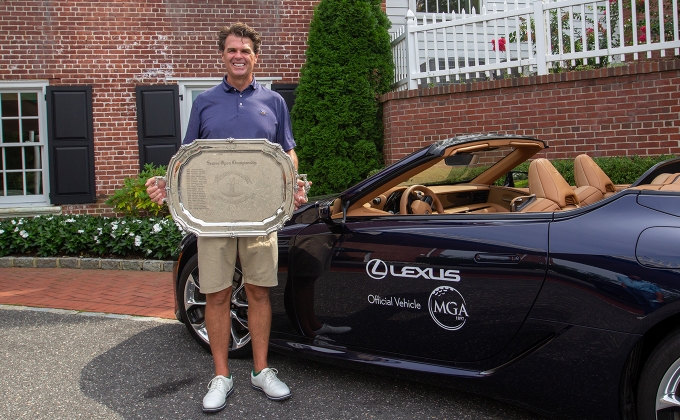 OLD WESTBURY, N.Y. (August 31, 2021) – A 6-under 66 in Tuesday’s final round of the 25th Lexus MGA Senior Open Championship propelled David Schuster of Sleepy Hollow to the top of the leaderboard for an exciting one-stroke victory at Old Westbury Golf and Country Club.

Schuster’s 66 was the low round of the Championship and followed up his opening round of 2-under 70, which placed him two shots off the first-round lead. While 24 players carded sub-par scores during Monday’s opening round, Schuster, runner-up Mark Brown of Pine Hollow (4-under 68) and third-place finisher Rob Labritz of GlenArbor (5-under 67) were the lone players to break par on Tuesday.

“I made only one bogey during the day and it was a pretty stress-free round,” said Schuster, who credited a nice up-and-down save on the first hole to putting the round on the right track.

“I hit it pretty solid for most of the day, just kind of kept it in front of me, hit a lot of greens and just made some birdies,” said Schuster, who turned 50 in March and was making his first appearance in the championship.

An early birdie dropped on the par-5 third, while two more came on Nos. 8 and 9 before he started his inward nine with a bang by making eagle on the par-5 10th and jumping to 7-under.

His lone bogey came on the par-4 15th after missing his approach in a front greenside bunker. But, Schuster bounced back quickly and finished strong.

He found the par-5 16th in two, hitting a 4-iron from the fairway to just outside of 10 feet to make an easy two-putt birdie. Though a good look for birdie didn’t drop on the par-3 17th, Schuster closed in style, draining a 20-foot birdie putt after hitting 3-wood into the fairway and a pitching wedge onto the 18th green.

Schuster admitted he’s not a scoreboard watcher and that he was “just trying to shoot the best number I could” out there. But he was certainly excited to see that last birdie look drop.

“I was very happy that I made the putt,” said Schuster, who collected the $5,000 first-place price for taking the title. “I didn’t know my standing in the tournament, but I was just happy to make one more birdie and finish off the round nicely. It’s fantastic to put my name on the trophy and have some bragging rights for one year.”

Schuster finished several groups ahead of the final pairings, with Brown in the next-to-last pairing standing as the last contender that could spoil his victory.

Brown, who was aiming to become the eighth player to have both a Met Open and Lexus MGA Senior Open on their resume, made a valiant effort to force a playoff. After his drive ended up in the left rough, he still managed to find the green from a challenging lie. His tying birdie look from 25 feet just slid past the edge to leave Schuster as the champion.

Labritz also managed to make birdie on the finisher to close out his round of 67 and a solo third-place finish. First-round co-leader Dave Scialabba of Meadow Brook shot even-par 72 playing alongside Mike Gilmore of Winged Foot (77/T10) and finished fourth to earn low amateur honors. Scott Wise of North Hills—who also entered the final round with a share of the lead—turned in a 1-over 73 to finish fifth. Del Ponchock of Hudson National and past champion Craig Thomas of Metropolis took solo sixth and seventh, at 2-under and 1-under, respectively, while Met PGA member Heath Wassem and 2020 champion Frank Esposito, Jr., of Forsgate tied for eighth at even-par for the Championship.

While Old Westbury has three times hosted the Met Open, it welcomed its first-ever Lexus MGA Senior Open and delivered an exciting championship finish. Players enjoyed the Overlook and Woods nines at the 27-hole facility and were tested especially on the layout’s undulating greens.