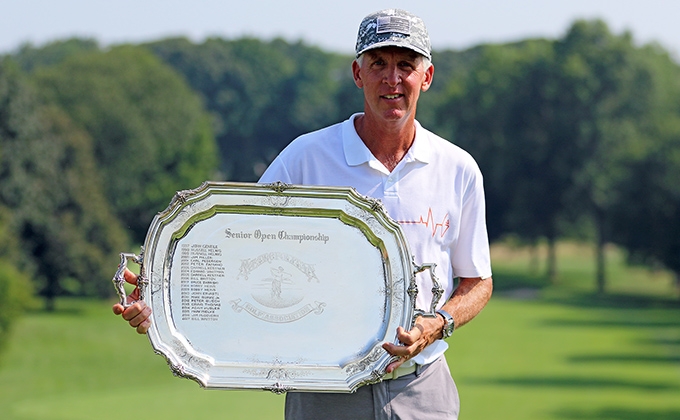 GLEN HEAD, N.Y. (August 28, 2018) – A 4-under 67 in Tuesday’s final round of the 22nd Callaway MGA Senior Open Championship led Mark Mielke to a one-shot victory at Glen Head Country Club as he captured the title for the second time in four years.

Mielke, 56, carded six birdies on the day to surpass and hold off overnight leader Mark Brown of Tam O’Shanter as the two separated themselves from the field early in the final round and created a two-person race for the title.

The third hole provided the first pivotal moment in the round. With Brown inside 10 feet for eagle, Mielke admittedly forced his third shot and caught a tree. His fourth landed some 20 feet away, making it seem as if Mielke would drop a shot and Brown hole out for his three. However, Mielke drained the lengthy par attempt, while Brown settled for birdie. Even though Brown still extended his lead, Mielke felt good about only giving up a shot.

“It was like a victory right there that I wasn’t three down from that one hole,” said Mielke “I just kind of hung in there.” Soon after, Mielke made his move, carding birdies on Nos 5, 7 and 9 (while also making bogey on No. 8), while Brown played the same span in 1-over par. Suddenly, the pair stood tied at 5-under heading to the final nine, where Mielke shot 5-under 31 in the opening round.

“I knew he was going to have good birdie chances on 15 and 17—he’s so long, and he can get on all the par-fives here in two, so I knew I had to have some birdies to offset his birdie opportunities,” said Mielke of his thoughts entering the homeward stretch.

Mielke made bogey on the 10th, but once again pulled even with Brown after by rolling in a birdie on the par-3 12th.

The 15th and 16th holes then proved as the second pivotal point in the round. Mielke came up just short of the green on the par-5, but placed his pitch inside four feet. Brown, who overshot the green from 250 yards, wasn’t able to get up-and-down and Mielke took his first lead of the championship.

Carrying momentum, Mielke fired his tee shot to eight feet on the 16th. Brown went long once again, this time shortsiding himself and forcing a flop shot. The attempt came up short, then he pitched his third close. Mielke drained his birdie try, taking a three-stroke lead with two holes remaining.

Brown made things interesting with birdies on the final two holes, but Mielke remained poised and made a pair of routine pars to claim the one-shot victory. For Mielke, previous experience at the course in the Pro Member-Guest with Scott Hawkins paid off.

With the win, Mielke collected the $5,000 winner’s check and became just the third player to claim multiple victories in both the Met Open and Senior Open, joining Darrell Kestner of Deepdale (3/2) and Bobby Heins of Old Oaks (2/2), who finished tied fourth and tied 19th, respectively, at Glen Head.

“Anytime you win twice, it’s awesome,” said Mielke. “It kind of validates the first time, so it’s nice to have multiple wins in any event and especially in the Met Area. I did it in the Met Open and it was 16 years after I won it the first time. So, that was kind of special to do that. I’m glad this one didn’t take 16 years. It’s something that I definitely will never forget.”

A final round 70 earned David Young of Sleepy Hollow solo third place at 1-under 141, while Kestner, Brent Studer of Metedeconk, and Frank Bensel of Century finished tied fourth at even-par 142 for the championship.

Christopher Toulson of Sunningdale, Jim McCann of Spook Rock and Mike Meehan shared seventh at 1-over 143. Frank Esposito of Forsgate, 2016 Senior Open champion Jim McGovern of White Beeches and John Deforest of Wiltwyck rounded out the top-10, tying at 2-over 144.

George Zahringer of Deepdale and William Charpek of Navesink finished tied for 14th at 4-over 146, finishing as the low amateurs in the championship. In all, 13 amateurs made the cut.

Glen Head Country Club, a superb Devereaux Emmet layout, played to a par 71 at 6,502 yards and served as a spectacular host for the Met Area’s top professionals and amateurs aged 50 and above. Despite challenging conditions including heat and rain this summer, the course was in top championship form and served as a stern test for the field.